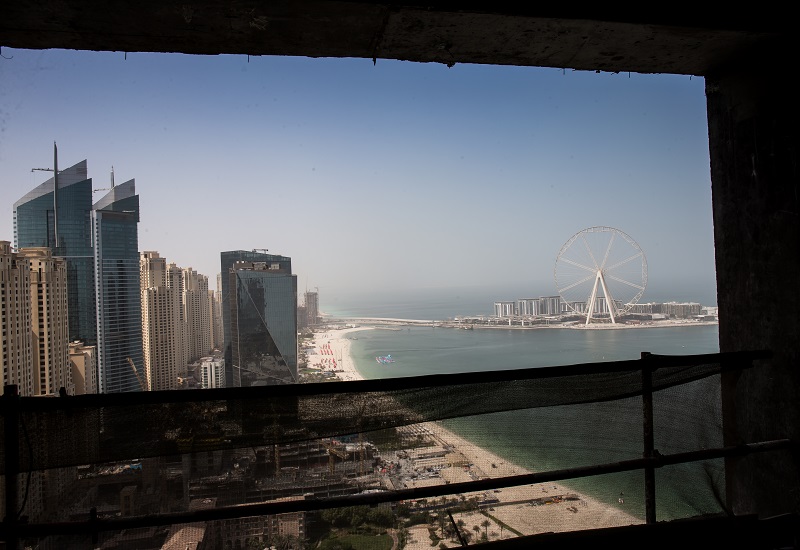 One thing that Dubai is not short of is real estate developments. But how many out of those falls in the category of premium luxury is a question that we ask. Located at the entrance of Jumeirah Beach Residence (JBR), a signboard points to one such significant residential developments in the neighbourhood, 1/JBR, being developed by Dubai Properties (DP). A member of Dubai Holding, DP broke ground on the flagship project in March 2016.

The tall structure features a blend of contemporary and timeless design along with exquisitely crafted interiors and views. Once complete, the development will be the only residential property in the area with direct beach access and its own dedicated roundabout for easy access to and from the community.

Valued at AED1bn, the project features 163 units of different configurations, including two-, three-, and four-bedroom apartments and five-bedroom penthouses. Standing at 239m tall, each apartment in the project offers panoramic views of the Arabian Gulf as well as the Ain Dubai and Palm Jumeirah. The tower sits on a gross floor area (GFA) of over 45,000sqm, with the built-up area (BUA) spanning 74,000sqm.

Ivar Krasinski, founding partner and design director at EDGE, tells CBNME: “When we look at real estate projects in the market, what we see in the name of luxury are quite ostentatious details and strange things being added to it. It is believed that the more you put on the wall, the better it looks. But on the contrary, the details tend to visibly cramp up the space.

“Being the lead consultant and design architects for this project, we decided to keep it bare minimum. What you will find in this kind of spaces is that your mind is at much more ease – you have room to think and breathe – there is not a whole bunch of details screaming at you.”

When EDGE was chosen to develop the residential project – located at the start of the beach strip on its last piece of land – the team was able to convince the client to try a new approach. Krasinki says: “In the UAE, a lot of buildings have curves without any function attached to it, which tends to steal space away from the units. At the time when we won the competition, we saw potential in the project and decided to go with a clean colour palette.”

The initial design for 1/JBR was created by EDGE as part of a competition to develop an innovative building concept that would provide a fresh and unique experience for residents in Dubai. After various design options and proposals, the firm was selected as the winner and awarded the complete design of the flagship project.

A DP spokesperson mentions: “The design principles behind the building were guided by two main goals, waterfront views and spatial clarity. The minimalist aesthetic is seen in every part of the building and its interior design. As a result, each space conveys a sense of serenity not commonly found in residential buildings. The rooms are designed to be well-lit, with ideal views and uncluttered volumes. Luxury building occupants are generally more concerned about privacy than the average person.

According to the developer, 70% of the total project has already been sold. Scheduled for completion in the fourth quarter of 2019, the project is well on track, with the team currently completing one floor of the building every week. Currently there are around 1,500 construction professionals on site, with the contractor adding further supervisors, area managers, and health and safety (HSE) personnel as and when they see fit. During the peak construction phase, the numbers will surpass 2,000 on site.

Martin Baerschmidt, founding partner and managing director, points out: “The site is incredible; it’s a premium address. Not a single unit is without a view. Initially the site was being used for some other JBR works. Then we had to come to the site early and clear the contractors away. Followed by a long initiation period, the contracts were awarded for the enabling and shoring works to National Piling Company (NPC). That went on till eight to nine months, following which the tender for the main contract works was awarded to Dubai Contracting Company (DCC).”

DP had assigned a project management team to the 1/JBR development to create a detailed target schedule of construction. This work was done before the contractor got active on site as it gave the team time to set up to track the progress of the project.

With such a huge project comes its own set of logistical challenges. One of the key components of 1/JBR is that it is situated in a prime location on the popular JBR destination. The spokesperson from DP continues: “Logistically, the project has had to be closely monitored, with schedules run tightly to make sure that the public and surrounding businesses are not affected. The contractor has had to pay close attention to the deliveries of materials to keep noise to a minimum, as well as not increase the traffic in the area.

“Finding the balance around the construction site that would allow for constant progress on the development, while taking into account the challenge of having one main entrance/exit for the site. A way to help alleviate the risk of traffic came through our work with Dubai Municipality and the Roads and Transport Authority (RTA) – creating an extra exit from the Mamsha Street that would take trucks straight back towards Dubai Media City, rather than along JBR.”

The 1/JBR is a large-scale project and to maintain the tight schedule that has been put in place by Dubai Properties, there is a lot of manpower required but this also means that a lot of logistical work has been put in to ensure a safe and secure work environment that meets all HSE standards.

Before the project even broke ground, the developer points out that it sat down with local authorities and hotel management to explain the situation that could arise from the project and what affects it could have on the construction phase. The spokesperson says: “We took various stakeholders through the sequence of construction, work timings, and methodology to make them more aware of the project. Opening up communication with residents of JBR and hotel management allowed for advanced notice to be given regarding heavy construction that was planned.

“We wanted to make as little impact on the community as possible and not create an increase in traffic in the area, hence we planned most of the supply of materials to be stored on site. Using state-of-the-art construction techniques and tools also allowed us to self-monitor during the construction phase. Noise monitoring sensors were installed around the site so that we could ensure that any work done at night would cause a minimal amount of noise. The hotels and residents were also given the ability to contact the project management team if the work on the site was too noisy during the night.”

Keeping sustainability in mind, Krasinski mentions that EDGE has sourced the raw materials as locally as possible. “It makes sense both economically and from the sustainability point of view as well. Basically, we have floor-to-ceiling glass windows in every unit and, at the same time, the residents will not experience extreme heat due to the solid wall on the other side, which reduces the amount of heat coming into the building. Hence it reduces the amount of HVAC and electricity used; in this way, everything is benefitting from the design.”

As DP says, the completion of 1/JBR will have a significant impact on the JBR community, especially as it will be taking up the final plot of building land in the area. “This 46-storey gatekeeper to JBR will add a distinct look to the community’s skyline, while also adding its own take on what luxury in Dubai entails.”