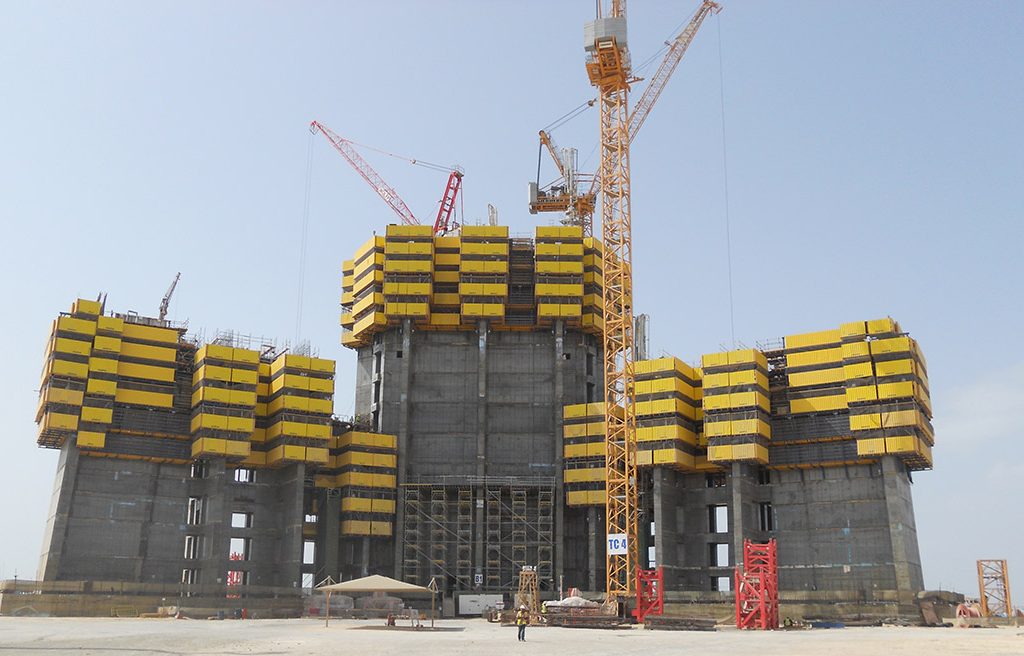 Construction Business News ME takes a look at the progress of the upcoming tallest building in the world, Kingdom Tower, in Jeddah. The CEO of Jeddah Economic Company (JEC) says that the project is on track and talks about adding new features that are record breaking as well, such as the Kone’s new fastest elevators in the world

The vision of His Royal Highness by H.R.H Prince Al Waleed Bin Talal Al Saud, Chairman of Kingdom Holding Co, of constructing the tallest tower in the world is taking shape as the construction for the tower begins. Built by the Saudi Bin Laden Group, the Kingdom Tower, is expected to rise to the height of more than one kilometre once completed in 2018. It will consist of offices, a Four Seasons hotel and serviced apartments, residential apartments as well as the world’s tallest observation deck.

Mounib Hammoud, Chief Executive Officer of JEC, says that as they are aiming to build the highest building in the world, it will aim to be the greatest by all standards.

The project has been underway currently and the CEO says that they have been on track. He predicts that by September they will be completed the construction of 47 floors and by the end of the year it should be 55.

The project has been carefully undertaken by all the entities working on the project. One of the top priorities on the agenda is health and safety. Hammoud talks about one of the major precautions to be taken while building a tower, which is fire safety precautions. He says that the cement used during construction is fire resistant for up to four hours. He also says that there is no gas being used in the building and the only spaces that uses it is in the kitchens and hotels located in the ground floor of the building. The tower will also consist of eight refuge floors which is the place people can go to in case of a fire till the problem is resolved. Hammoud says that there are many precautions taken and the tower will be built in the best possible way with the great standards in terms of health and safety.

JEC has the full support of the government, Hammoud says that this project is at a national level. “Not only nationally but having the tallest tower in the world will affect the country on an international level.” He says that this project which includes the upcoming Kingdom Tower and Kingdom City in Jeddah, will reposition the city amongst other international cities and be a landmark for Saudi Arabia.

Another record to break

Urbanization is a key driver for the development of cities and the elevator industry. More than half of the world’s population already live in urban areas, and the United Nations estimates that by 2050 seven out of every 10 people on the planet will be living in cities. Building upwards is seen as the sustainable urban solution, and the number of tall buildings built around the globe has increased rapidly in recent years. Increasingly, tall buildings are also growing taller. Nearly 600 buildings of 200 metres or more are currently under construction or planned to be built over the next few years, according to the Council on Tall Buildings and Urban Habitat. While there are currently three buildings in the world that top the 500-metre mark, there are plans for 20 more such buildings to be built in coming years.

JEC has selected KONE as the vertical transportation provider, to deliver the world’s fastest and highest double-decker elevators to Kingdom Tower. Featuring Kone’s people flow solutions with travel speed of over 10 m/s as well as the elevator rise at 660 metres.

The building will be equipped with altogether 65 Kone elevators and escalators. The order includes Kone Double Deck MiniSpace elevators with UltraRope hoisting technology. The UltraRope is a new high-rise elevator technology that is set to break industry limits and enable future elevator travel heights of 1 kilometre – twice the distance currently feasible. The UltraRope technology eliminates the disadvantages of conventional steel rope and opens up a world of possibilities in high-rise building design. Comprised of a carbon fibre core and a unique high-friction coating, the UltraRope is extremely light, meaning elevator energy consumption in high-rise buildings could be cut significantly. The drop in rope weight means a dramatic reduction in elevator moving masses – the weight of everything that moves when an elevator travels up or down, including the hoisting ropes, compensating ropes, counterweight, elevator car, and passenger load. Due to the significant impact of ropes on the overall weight of elevator moving masses, the benefits of UltraRope increase exponentially as travel distance grows.

“We are proud to introduce this innovation that we are certain will revolutionize the elevator industry for the tallest segment of buildings across the globe. The benefits of KONE UltraRope versus conventional elevator hoisting technologies are numerous and indisputable,” says Kone’s President and CEO Matti Alahuhta.

“We have been highly impressed with Kone’s innovative solutions to high-rise buildings. This is another corner stone for a development of this magnitude and we look forward to creating this landmark building in all standards”, says Hammoud.

“Close cooperation between all project partners, and with Kone Areeco team locally, our technical professionalism and people flow planning expertise was a winning combination in helping us land the order,” comments Noud Veeger, Executive Vice President for KONE in Asia Pacific and Middle East. “We hail this project with great excitement.”

Kone Areeco is KONE’s Saudi Arabian joint venture company with Kone holding 50% of the shares. Kone Areeco has several flagship projects in Saudi Arabia, such as the successfully completed Makkah Royal Clock Tower Hotel in Mecca, as well as ongoing projects such as the King Abdullah Financial District in Riyadh, and the King Abdulaziz International Airport and the Headquarters Business Park in Jeddah. KONE Areeco has been involved in the planning and design of all vertical transportation systems for the Kingdom Tower over the past two years in conjunction with KONE’s global experts. The project team arrived on site last January and is currently working on pre-installation activities concerning the fitting of the elevator system’s guiderails, which is expected to begin towards the end of this year. The installation of the guiderails, as well as the eventual installation of the KONE elevator cars, will then progress as the Kingdom Tower’s central structure rises over the coming years.

“We are absolutely thrilled at having our operations up and running at the Kingdom Tower construction site and to start our installation activities alongside the construction of the tower’s core structure,” says Sascha Brozek, Senior Vice President, Major Projects, KONE. “Without a doubt, the Kingdom Tower project will push the industry’s limits to new heights and we are very proud to be an integral part of that journey. We also look forward to continuing our close collaboration with JEC, the Saudi Binladin Group and all the other parties involved in the construction of this epic landmark.”