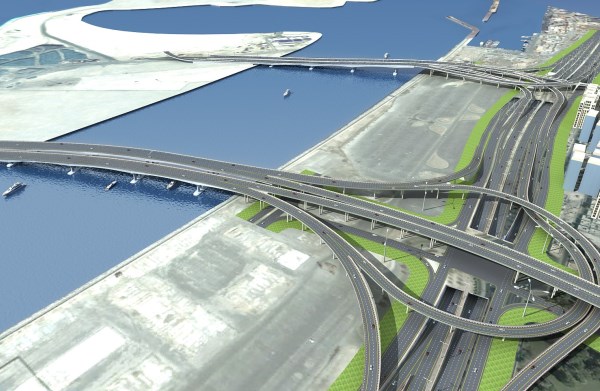 The Roads & Transport Authority (RTA), in coordination with Nakheel, has awarded a contract for the construction of three bridges leading to Deira Islands. The bridges, which link with the existing bridge crossing the water canal, consist of six lanes in each direction and will be built at cost of AED447mn.

The project is undertaken in line with the directives of HH Sheikh Mohammed bin Rashid Al Maktoum, the Vice President, Prime Minister and Ruler of Dubai, to implement road projects related to Shandagha Roads Corridor. Mattar Al Tayer, Director-General and Chairman of the Board of Executive Directors of RTA, said: “The project aims to improve the entrances and exits of Deira Islands at the intersection of Al Khaleej & Abu Baker Al Siddique Streets. The bridges span 1.6km in total. An additional 140-metre bridge will be constructed together with a slip road on Deira Islands side. The existing bridge will also undergo improvements including re-pavement, rails, traffic signs, utility lines and street lighting.”

Nakheel’s Deira Island Project is the Dubai’s new waterfront. It consists of four man-made islands reclaimed from the Arabian Gulf along the coast of Deira spanning 1700ha; rendering it the largest development project in Deira. The project comprises the construction of hundreds of hotels, furnished flats, mixed-use buildings and marinas.

The new project is expected to attract about 250,000 residents as well as 80,000 employees. Traffic studies indicate that the project will generate about 110,000 journeys during peak hours, which requires a huge infrastructure of roads and public transport networks. Three bridges will be constructed at the main entrances and exits of the Project crossing the water canal, including two entrances at the intersections on Al Khaleej Street with Abu Baker Al-Siddique & Abu Hail Streets.

The third entrance extends from Al Mina Street parallel to Port Rashid. The flyovers and ramps to be constructed will ensure direct and free access to the Project