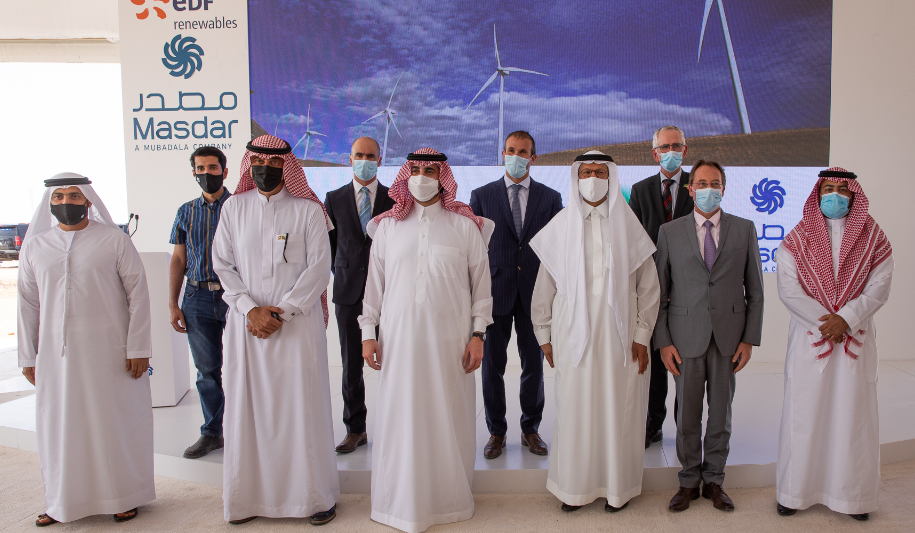 The 400-megawatt (MW) utility-scale project, the Kingdom of Saudi Arabia’s first wind farm and the largest in the Middle East, is being developed by a consortium led by EDF Renewables and Masdar, two of the world’s leading renewable energy companies.

The installation of the first turbines began in August 2020 on the site, located 900km north of Riyadh, in the Al Jouf region of Saudi Arabia, and the project is expected to be completed in 2022. The wind farm will comprise 99 wind turbines, each with a power output of 4.2 MW. The first power produced by the wind farm is expected in the coming weeks.

When complete, Dumat Al Jandal will generate clean energy that can power up to 70,000 Saudi households per year, while the project will save 988,000 tonnes of CO₂ per year in support of the Kingdom’s climate change  mitigation goals.

Under Saudi Arabia’s National Renewable Energy Program, the Ministry of Energy awarded the US$500 million Dumat Al Jandal wind farm to the EDF Renewables-Masdar consortium in January 2019 after it submitted the most cost-competitive bid of US$21.3 per megawatt hour (MWh). At financial close, the project made a 6.5 percent gain on levelized cost of energy (LCOE) that reached US$19.9/MWh.

Osama bin Abdulwahab Khawandanah, Chief Executive Officer of Saudi Power Procurement Company, which is responsible for purchasing the entire production of the Dumat Al Jandal project, said: “It is indeed a great pleasure to know that Masdar and EDF have successfully achieved this key construction milestone of the 400 MW wind power plant installed at Dumat Al-Jandal, which shall energize the first phase of the project with KSA grid system in the coming weeks. This project shall be the first large utility-scale wind farm in the Kingdom. Saudi Power Procurement Company (SPPC) will purchase all electricity production from this green energy project as principal buyer (the energy off-taker) as per the executed long-term contract of 20 years. My heartfelt congratulations to the project company management and their team members on this accomplishment.”

Bruno Bensasson, EDF Group Senior Executive Vice-President Renewable Energies and Chairman and Chief Executive Officer of EDF Renewables, declared: “It is an honour to contribute to the Kingdom’s energy transition with the construction of Dumat Al Jandal wind farm, the most powerful in the Middle East. We are grateful to the authorities and entities in charge of implementing the National Renewable Energy Program for their support. With half of the power plant already installed, we are now looking forward to successfully reaching, with our partners and contractors, the full commissioning of the project in the months to come.”

Mohamed Jameel Al Ramahi, Chief Executive Officer of Masdar, said: “Masdar is proud to be leveraging its experience in renewable energy to deliver the Kingdom of Saudi Arabia’s first wind farm in collaboration with our partners. The completion of half of the project marks an important milestone and we look forward to seeing the project’s progression over the coming Months.”

“As a global leader in the development of commercially viable wind power, Masdar is committed to advancing clean technology across the region and we will continue our efforts to support the country’s ambitious energy program,” he added.