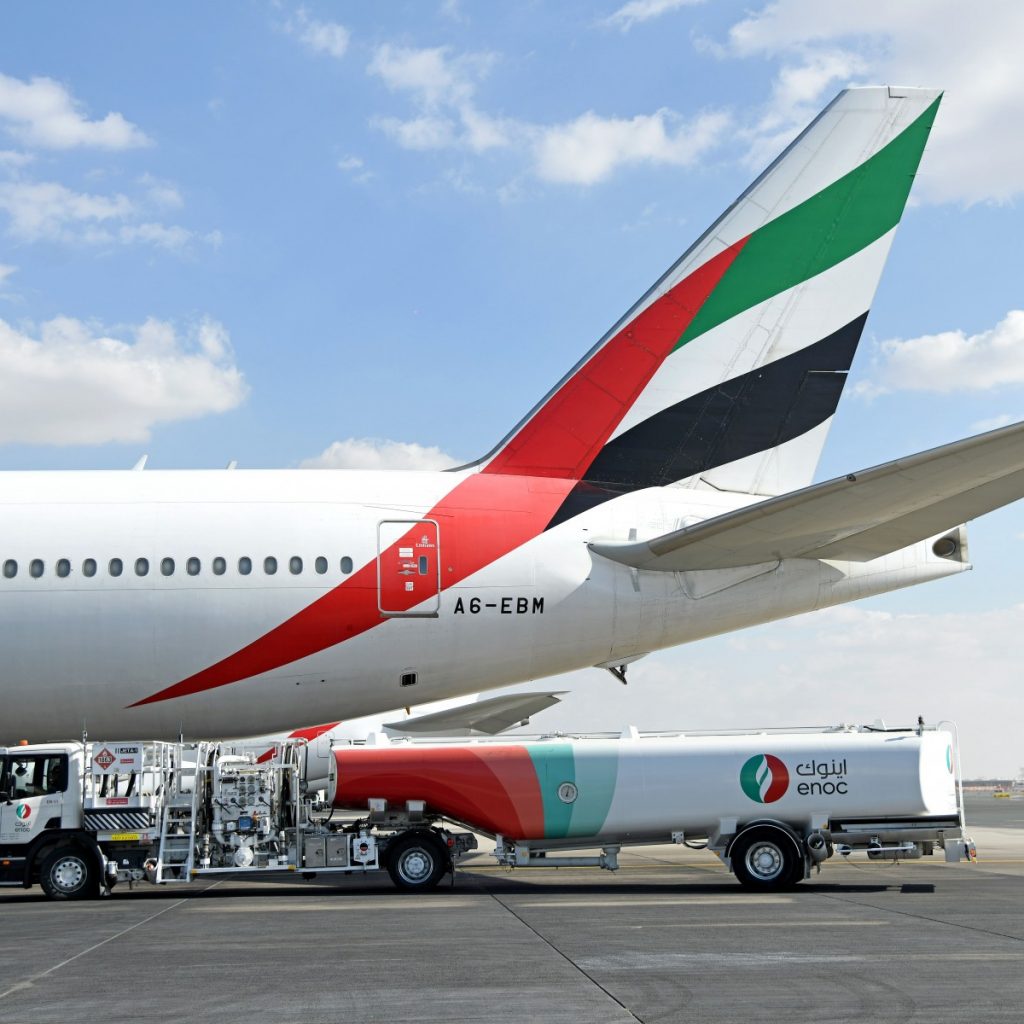 Emirates has completed the ground engine testing for one of its GE90 engines on a Boeing 777-300ER using 100% Sustainable Aviation Fuel (SAF). The objective of the ground testing and analysis is to demonstrate the capability of the GE90 engine to run on the specially blended 100% SAF without affecting its performance, requiring no modifications to the aircraft systems or special maintenance procedures on the Boeing 777-300ER or GE90 engine to operate. SAF reduces carbon emissions over the fuel’s life cycle by up to 80%.

The ground test results will pave the way for the airline’s first experimental test flight using 100% SAF in one engine, which is due for take-off this week. The testing activities involved running one engine on 100% SAF and the other on conventional jet fuel to better analyse the fuel system’s behaviour and performance under each fuel type, compare specific outputs of each engine and ensure seamless operation of the aircraft’s engine and airframe fuel systems during the planned test flight.

During the ground testing at the state-of-the-art Emirates Engineering Centre in Dubai, the aircraft first went through its normal pre-inspection activities. After that, the stationary operating testing began by running the Honeywell 331-500 auxiliary power unit (APU) on 100% SAF. The APU was then loaded with SAF to start the engines. The left engine was exercised through its full power range, utilising the same settings used for the experimental flight. This included idle, take-off, and climb settings at full flight profile durations, running at maximum speed and intensity. Engines were then run at ‘cruise’ settings for 15 minutes. After the simulation ended, the machines were cooled down. Fuels were isolated in separate fuel tanks to maintain the segregation of test fuels. Upon completion of the ground test, engine data was downloaded for review, comparison, and analysis.

At the Dubai Airshow 2021, Emirates, GE Aerospace and Boeing signed a Memorandum of Understanding (MoU) to develop a programme for conducting a test flight using 100% SAF on an Emirates 777-300ER powered by GE90 engines.

Emirates has been working with its partners GE Aerospace, Boeing, Honeywell, Neste and Virent Inc., a subsidiary of Marathon Petroleum Corp, throughout 2022 on SAF fuel blend testing. The partners have developed a blend with the same qualities and performance characteristics of conventional jet fuel and have collaborated on the technical analysis and operational requirements surrounding ground testing and experimental flight activities. The results of this initiative will provide additional data and research around synthetic fuel blend components and biofuels, supporting standardisation and future approval of 100% drop-in SAF. Following the successful trial on one engine, Emirates will continue to develop these initiatives with the engine airframe manufacturers and SAF providers to certify these blends for commercial use. Currently, SAF is approved for use in mixes of up to 50% with conventional jet fuel.

Emirates has long been a supporter of industry and government efforts to encourage the development of the SAF industry and regularly participates in initiatives to contribute to SAF deployment. Its first flight powered by SAF blended with jet fuel was in 2017, operating from Chicago O’Hare airport on a Boeing 777. Emirates received its first A380 powered by SAF in December 2020 and uplifted 32 tonnes of SAF for its flights from Stockholm earlier that year, with the support of Swedavia’s Biofuel Incentive Programme. Flights from Oslo have also begun operating on SAF.

Emirates is on the Steering Committee of the World Economic Forum’s (WEF) Clean Skies for Tomorrow initiative, which seeks to promote SAF deployment worldwide. The airline has also contributed to the UAE government’s work on a SAF roadmap and the WEF-supported Power-to-Liquids Roadmap for the UAE.