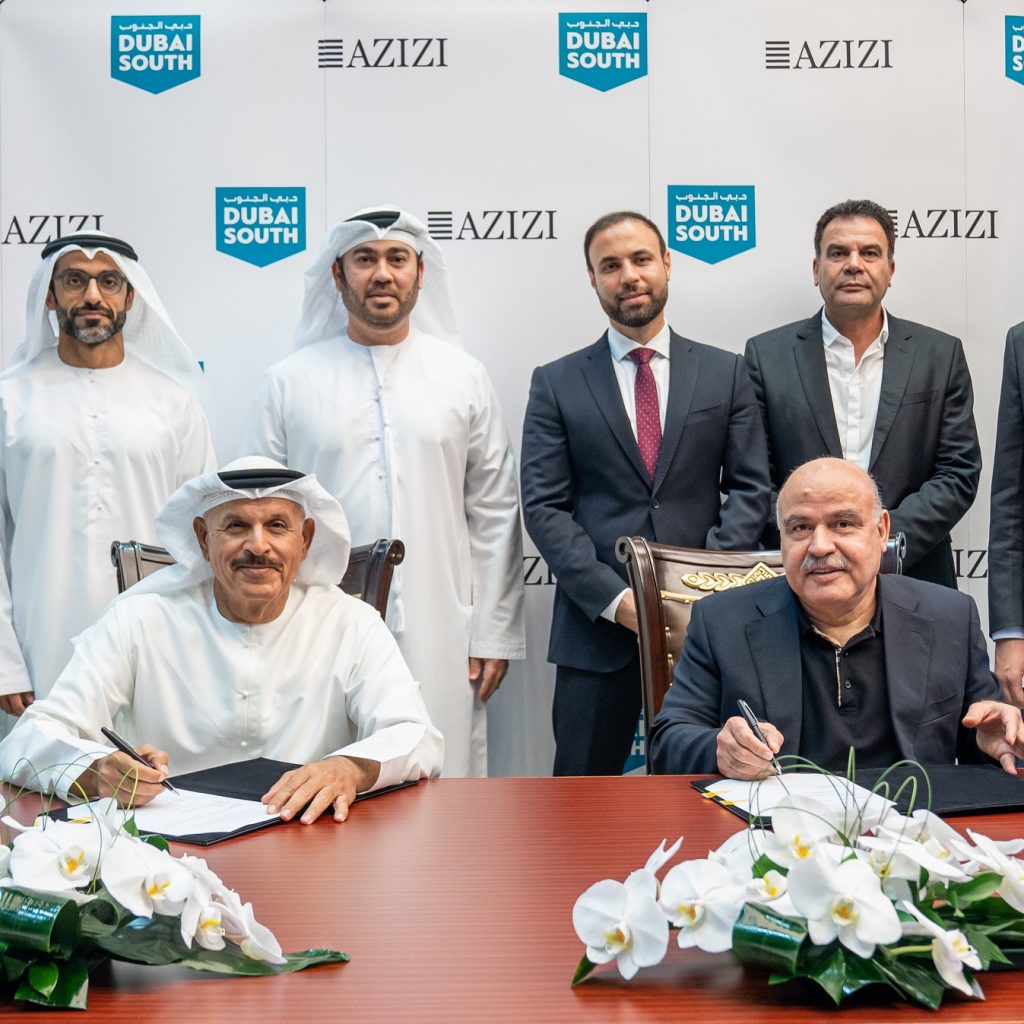 Azizi Developments, a leading private real estate developer in the UAE, signed a deal with Dubai South, the largest single-urban master development focusing on aviation, logistics and real estate, acquiring a highly coveted 15 million sq. ft. plot of land in the most growth-inclined area of the emirate. With a gross floor area of nearly 24 million square feet, Azizi’s several-dozen-billion-dirham plans for the sizeable land are yet to be revealed. As part of the agreement, Azizi Developments will be the master developer, in charge of constructing the development’s buildings, its roads, and infrastructure.

The signing ceremony took place on 21 November at Azizi’s stand at Cityscape Dubai 2022 and was presided over by the Executive Chairman of Dubai Aviation City Corporation and Dubai South, His Excellency Khalifa Al Zaffin, and the Founder and Chairman of Azizi Developments, Mr Mirwais Azizi. Also in attendance was CEO of Azizi Developments, Mr Farhad Azizi, and other key senior management figures from both parties, the media and a crowd of excited onlookers.

Mr Mirwais Azizi commented: “We are excited to embark on this new master development journey, the next era of our growth trajectory and that of Dubai. This sizable land represents an exceptional opportunity to contribute to the satiation of the exponentially increasing demand for world-class properties in the UAE. The emirate continues to solidify its renowned standing as the world’s hub for business, tourism, and innovation, underlined by the increasing number of investors and end-users choosing to secure themselves homes here. We thank His Highness Sheikh Mohammed bin Rashid Al Maktoum, Vice President and Prime Minister of the UAE and Ruler of Dubai, and all of the UAE’s leadership from the depths of our hearts for continuously inspiring us to work towards enriching the lives of hundreds of thousands of happy families who have the honour of calling Dubai their home. We will share more information on our plans for this soon-to-be landmark community in due course.”

His Excellency Khalifa Al Zaffin said: “We are pleased to sign this plot purchase deal with a renowned developer that enjoys a good track record of developing real estate projects and communities across the UAE. At Dubai South, we select partners that align with our mandate to enrich the lives of residents and professionals across the emirate and support the government’s vision of making Dubai the best global city to live, work and visit. We look forward to the realisation of this new project, which will undoubtedly become one of the emirate’s most-prized destinations.”

The newly acquired land, which is part of Dubai South’s prestigious Golf District, is strategically positioned in the emirate’s growth corridor, with Dubai speedily expanding towards the south. Situated alongside Emirates Road (E611), built to link the emirates together while also providing convenient access points to Dubai’s other major highways and various points of interest, the plot of land is among the best connected in the southern part of the emirate.

With just a five-minute drive to the Al Maktoum International Airport, also known as Dubai World Central DWC, and few minutes away from the VIP Terminal, but without any air traffic above it, the land is outstandingly well positioned for a luxury community to be developed.

Azizi Developments did not disclose its detailed plans for the land during the press briefing held at Cityscape Dubai 2022. It stated that the planning and design for the project are already in advanced stages and that it will develop townhouses, villas, residential apartments, hotel apartments, several types of hospitality projects ranging from three to five stars, and a wide range of amenities, including a swimmable crystal lagoon, water features, parks, sporting facilities (eg. cycling and jogging tracks), children’s playgrounds, green spaces, innovative infrastructure and more to go above and beyond in fulfilling the well-being, comfort, and convenience needs of residents.