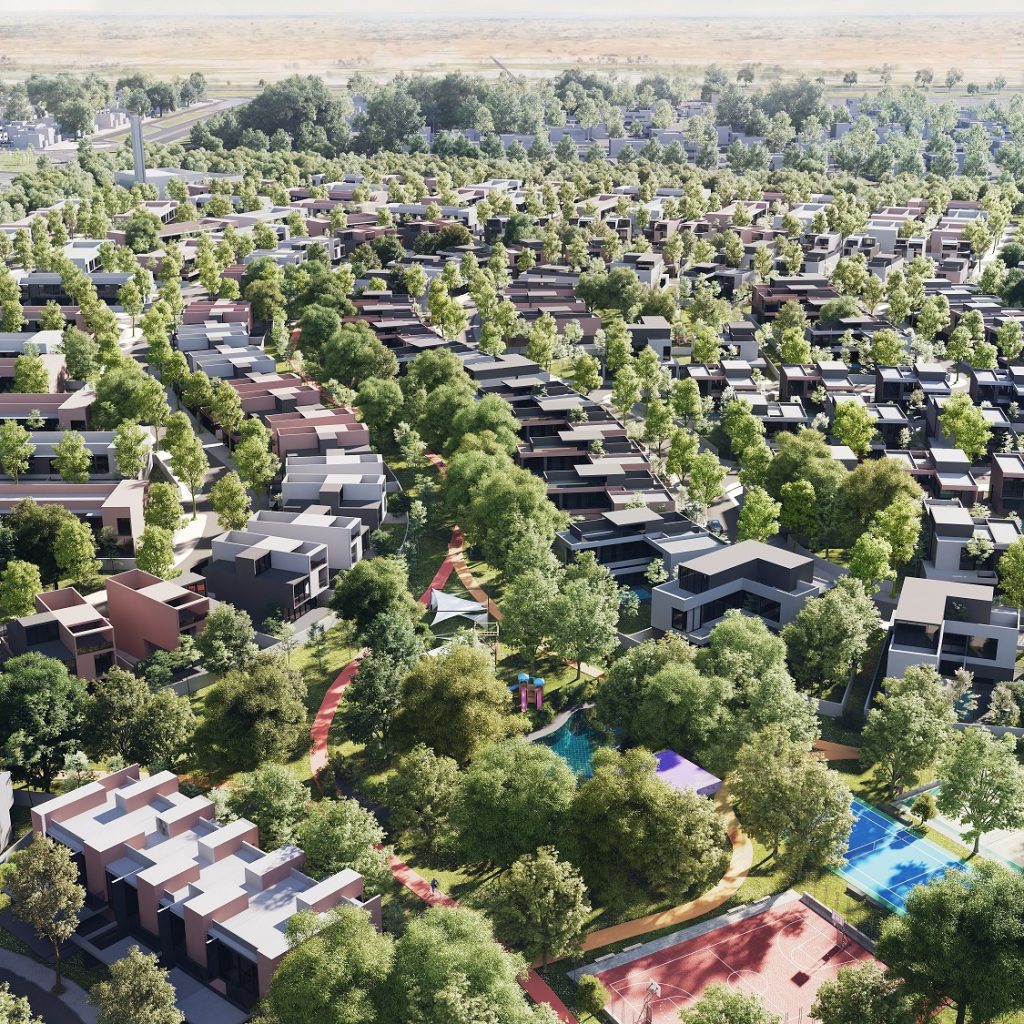 Arada has launched Kaya, the second residential phase of its forested lifestyle mega community Masaar, located in the Al Suyoh district of Sharjah. Containing 421 townhouses and villas, the launch of Kaya has been brought forward following strong demand for homes in the first phase of the AED8 billion Masaar megaproject.

Designed to encourage active and healthy living in harmony in nature, Masaar was launched in January this year, and offers 4,000 beautifully designed villas in eight gated residential districts, all clustered around a ‘green spine’ containing a host of outdoor and sporting facilities and boasting 50,000 trees.

HRH Prince Khaled bin Alwaleed bin Talal, Vice Chairman of Arada, said: “Our promise when we launched Masaar was to provide a new standard of living, not just for Sharjah but the entire GCC. We are doing that by delivering homes with an exceptional level of quality, backed by an impressive list of amenities, at a truly competitive price. Our sales so far tell us that both investors and end-users have welcomed this strategy, and we intend to repay their faith by doubling down on the sporting facilities that we will offer in a community that is dedicated to healthy outdoor activity.

“We also continue to benefit from the ongoing demand in Sharjah’s property sector, which has been assisted by ongoing investment into local infrastructure and good regulation, leading to a 40% growth in the value of property sold in the Emirate during the first six months of the year.”

From two-bedroom townhouses to spectacular five-bedroom luxury villas, homes at Kaya are designed around traditional Sanskrit Vastu Shastra principles, which aim to integrate architecture with nature. By following specific home designs and layouts, residents at Kaya will benefit from enhanced wellness and positivity.

New home types to be introduced in Kaya will bring a new living experience for residents. These include a luxury five-bedroom Kaya Forest Signature Villa set on three floors, with a lift and swimming pool added as standard. The second floor of the Kaya Forest Signature Villa features an extensive master suite incorporating living space, a pantry and a large terrace. In addition, all properties overlooking Masaar’s green spine will include rooftop terraces from which residents will be able to enjoy views of the forested heart of the community.

Ahmed Alkhoshaibi, CEO of Arada, said: “Due to exceptional demand in the first phase of Masaar, where we have already sold property valued at AED750 million, we have brought forward the launch of the second phase of this nature-inspired community. We are sure that the introduction of new unit types and new facilities within Masaar will resonate with buyers, and we will continue to provide added value to Masaar as we develop through its phases.”

Each home at Kaya has been designed to bring the nature-filled surroundings inside the house, while ensuring the privacy of its residents. Smart features, including remote access, climate and lighting control will be a standard feature of every unit, alongside a free cooker, hood and washing machine/drier. Each home also has direct access to leafy parks and will also incorporate natural features such as trees into its design.

Construction at Kaya will begin in the second half of 2022 and the first homes will be completed by the end of 2023.

Arada is also introducing new facilities to the Masaar master plan, including two new 6.6-kilometre continuous jogging and professional cycling tracks, which run through woodland areas planted around the edge of the community. Both tracks will be completed in the second quarter of 2022, alongside the opening of the Masaar Experience Centre and show villa.

Masaar, or ‘path’ in Arabic, is spread over a 19 million square foot master plan has been carefully designed to enable its residents to transform their lives by encouraging healthy living in a walkable and forested environment. Families residing in Masaar will enjoy a peaceful yet world-class living experience, with acres of green space allowing for forest walks, picnics, running, cycling or meditation. Already-announced facilities include a 5-kilometre looped cycling track running through the interior of the community; nine ‘active parks’, which will incorporate swimming pools and sports facilities; a Zad food truck park and village; a children’s adventure playground and a skatepark.

As part of Arada’s drive to develop its communities responsibly, Masaar’s green spaces will be irrigated by recycled water from the community’s onsite treatment plant. Water distribution will also be undertaken by a state-of-the-art irrigation system that will reduce the amount of water required and also monitor any leaks or losses in the system. Forested areas at Masaar will be grown using a mixture of species native to the UAE and lush plants and trees, that will together create a micro-climate that contributes to a reduction in overall temperatures, thus reducing cooling costs within the community.

The first phase of Masaar, Sendian District, is now 95% sold out, and the first contracts for the megaproject were awarded in May. These included the contract for infrastructure design and supervision consultancy services, which was won by US engineering consultancy Parsons Overseas Limited, while the contract to build the Masaar Experience Centre and show villa was awarded to ASGC. The design and supervision services contract for the first residential phase of Masaar was awarded in September, and the first homes in the project are scheduled to be handed over by the end of 2022.

Masaar is ideally located in the up-and-coming Suyoh district, close to Tilal City, the Sharjah Mosque and Arada’s first project, Nasma Residences. The community has easy access to Emirates Road and Mleiha Road, and is 15 minutes’ drive from Sharjah International Airport, and 20 minutes’ drive from Dubai International Airport. The location is ideal for a convenient and traffic-free commute from Sharjah to Dubai or the Northern Emirates.