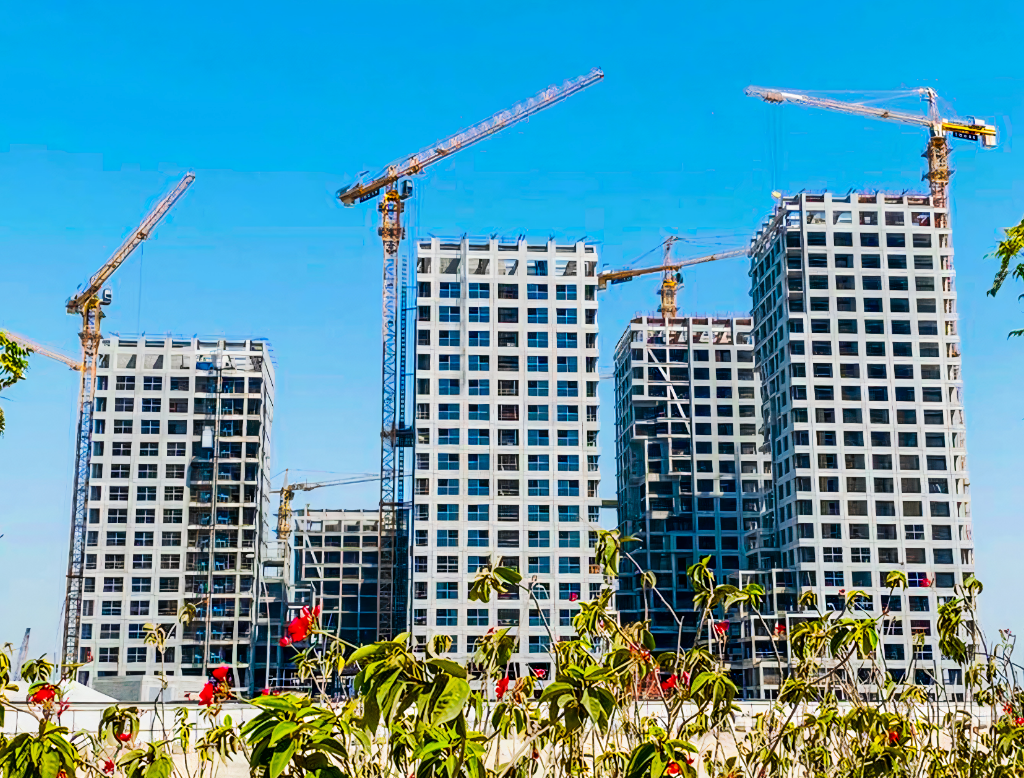 On the far-east corner of Reem Island, a future architectural landmark is in the making. A project that raises the quality benchmark for mixed-use residential developments in the region. PIXEL, the seven-tower development by IMKAN Properties in collaboration with famous Rotterdam Architects MVRDV, continues the story of the new Makers District community.

IMKAN activated the District last year through the launch of Cove Beach, which despite the challenges of Covid-19 has proved to be the number one beach club hotspot in the city.

As we approach the site, it is clear that the concrete structure of PIXEL’s seven towers is now complete. The stepping profile of the towers from the rear of the site toward the coastline, (from 20 stories on Tower 4 to 10 stories on Tower 1) is very evident.

From afar and closer still, the development commands a very different feel and scale to other towers on the island. On Towers 5 and 6, where off-site factory made bathroom pods are connected, mechanical, electrical and plumbing works are in and finishes being installed, and where pre-cast façade panels, window frames and glazing are being fixed at a rapid rate, the controlled nature of the periphery facades belie the complex nature of what will be the jewel within PIXEL.

MVRDV once described the project as ‘the oyster and the pearl’. Their projects often have a moment of surprise or a ‘reveal’. PIXEL will be no different. The incredibly rich design of the patterned façade panels (the oyster’s skin) is now clear given how advanced the works are on multiple towers. However, what we can now also glimpse as we drive past is a teaser of what is to come: the extraordinary articulation of the inner elevations that cascade from the upper levels down into the inner plaza. For now, we can only see the skeletal concrete frames, however we are told that the smooth white cladding to these frames will soon be underway.

“We have to wait a few more months before we then start to see the ‘pearl’ in this project – the beautiful coloured tiles which will line the inner plaza elevations, providing shading and screening for residents and visitors, but “good things come to those who wait…” says Nigel Craddock, Design Director. ‘We also have another feature which is yet to be revealed, related to our soft landscaping strategy within the plaza and the creation of a habitable microclimate– we’ll announce that soon” says Craddock “it’s going to be beautiful”.

Parvin Mansoor Al Awadhi, Head of Development adds “the IMKAN team working on Pixel have put forth their best effort to ensure that the development has continued with minimal interruptions at this critical juncture. The commitment and dedication of all those involved with the project – from our engineers, technicians and site team finalizing the building works, to the IMKAN customer representatives meeting potential buyers at the Pixel show apartment – is proving instrumental in meeting all the project milestones, which will culminate in the project’s final successful handover.”