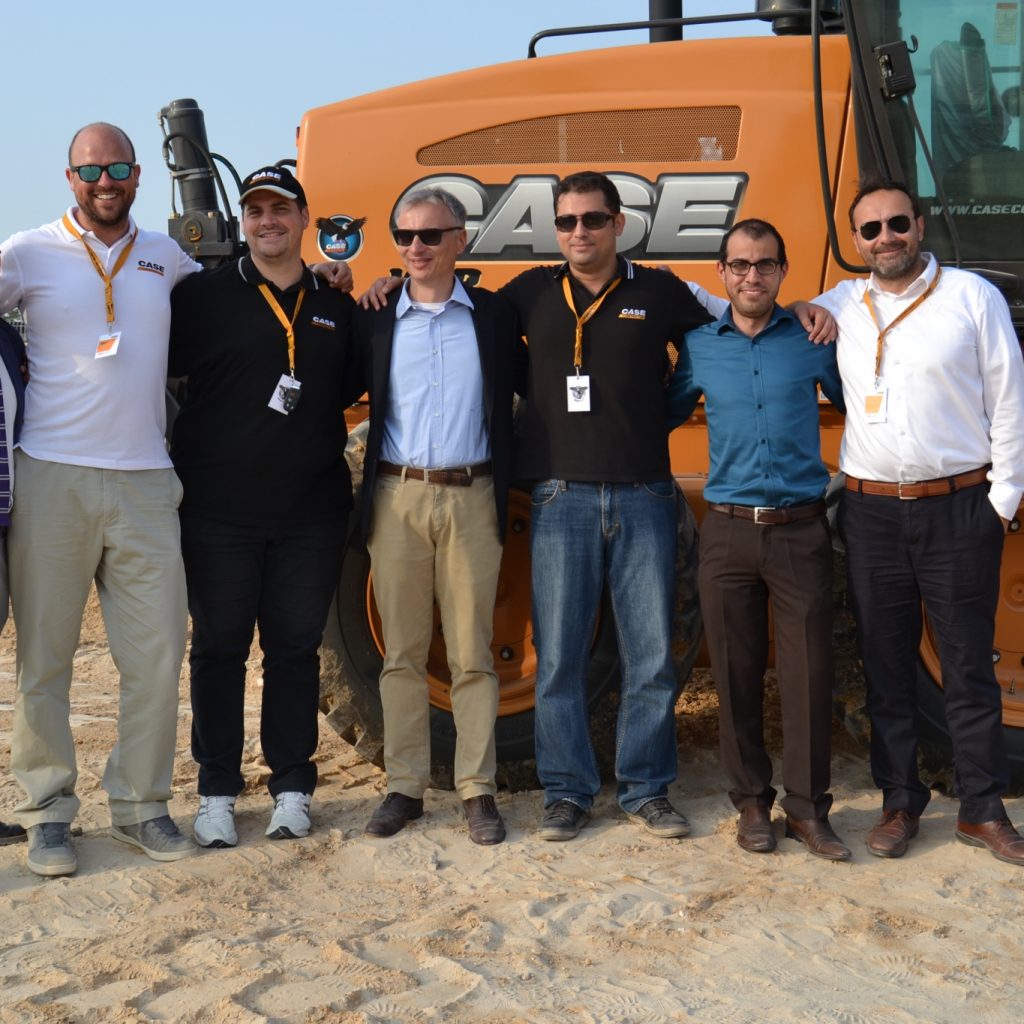 A Dubai debut for Cases Eagle Days event was a chance to see how its machines and support are changing in the region. Matthew Treanor writes

Theres only so much you can learn about your next big machine purchase from poring through brochures, technical data sheets and websites. With so much choice on the market, it can be a daunting task to decide which backhoe, excavator or wheel loader will help you win a tender or keep your workshop from turning into pile of spare parts and metal. Even in our digital world, there is ultimately nothing better than getting up close, climbing on-board and hearing what a machine can do directly from the people who built it.

With that in mind, manufacturers and their dealers continue to host operators, plant managers and contractors at open days. These are often opportunities to see the machines in action and get a clearer understanding of how buying new machines can, hopefully, give you an extra edge over your competitors. Unfortunately not all open days are the same, however equipment maker Case has continued to develop its own experience for its existing and future customers, as well as the sales teams tasked with selling its ever-evolving machine and equipment line-up.

Its impressive roadshow  CASE Construction Equipment Eagle Days  dropped into Dubai last month. The event has been on a tour that has included South Africa earlier in the summer, where it invited representation from across Sub-Saharan Africa, including 120 professionals from the host country, Mozambique, Uganda, Zambia, Namibia and Zimbabwe. A previous event held last year in Tunisia tackled the North Africa market.

Held between 20-22 November at the welcoming Jebel Ali Golf Resort and Shooting Club on the edge of the city, it was the turn of over 160 customers from across the Middle East and East Africa, including a large number from the UAE, plus Oman, Qatar, Palestine, Saudi Arabia, Iraq, Ethiopia and Djibouti, to find out more about its latest line-up.

Reviewing an event that completes a tour of his working brief, Franco Invernizzi, senior business director, CNH Industrial Construction Equipment for Africa and Middle East, is ready to look back on a successful programme of showing what Cases equipment offers to the regions.

He says that once again the company has had a great response to an EAGLE DAYS event, the first to be held in the region.

The Eagle Days have a proven format that is hugely successful and motivational for the CASE salesmen, says the charming Invernizzi.

He adds that the debut for the Dubai event has successfully emulated the showings in other territories.

Our Commercial Training Team, made up of experts for the real World, has delivered this format in Africa in Tunisia, in 2015, then in South Africa earlier this year, and now in Dubai, which has been equally successful.

The Case Eagle Days are designed to provide product and commercial training for sales professionals throughout the region, together with offering customers the opportunity to see first-hand the outstanding performance of Case machines in action.

The event kicked off an unseasonably warm Sunday in the UAE and was attended by 50 salesmen from eleven countries, across the Middle East and Kenya. The first two days included some intensive training, before ending with a Gala dinner on the Sunday evening.

The third day was dedicated to customers. There was a live machinery show plus product demonstrations from expert CASE operators on a wide range of equipment, which clearly impressed the numerous customers who attended.

According to Invernizzi, the format has been deliberately designed to make the most of a packed three-day schedule.

The first two days of the event were organised and overseen by the CASE Commercial Training Team, which also included product specialists, who provided both in-depth product walk-arounds in the demonstration area, plus classroom sessions in the two marquees, erected beside the demonstration area. The third day was the all-important chance to impress machinery and equipment buyers.

The two days of training on CASE machines are preliminary to the main show on the third day, which enhances the relationship between salesmen and customers, explains Invernizzi.

The CASE Commercial Training Team, including product specialists, were on hand throughout to provide advice on the best machine for each application. He adds that the company focuses on setting the right tone to ensure that the customers are welcomed and the sales and technical teams have the right environment to show the machines in the best light.

Our CASE dealers throughout the Middle East have really appreciated the work that has been put in by our EMEA Commercial Training team to make everyone feel so welcome, says Invernizzi.

Case has worked hard over the last few years to enhance its ability to make it easier for customers to gain access to its machines in the region. Its network has been bolstered and expanded and so has the team on ground with it adding expertise in spare parts, finance and marketing. This has resulted in a burgeoning presence in the market; and the Eagle Days event was also an opportunity to talk about its most recent addition to its offering: the opening of a new parts facility in Dubai.

The new hub joins a list of seven others that it operates throughout the Europe, Middle East and Africa (EMEA) region. According to Marco Baffoni, director, Dealer Parts Support Services EMEA, the facility will stock more than 11,000 part numbers and will be able to cover demand for the entire region. Being able to support customers rapidly to minimise their downtime will be a crucial element in Cases expansion in the region.

Thanks to this new site, delivery times will be slashed of several days, says Baffoni. Now we are able to supply our customer with parts within a couple of hours.

Unsurprisingly, the improvements to parts delivery featured high on the agenda on the third day. After a warm welcome from Franco Invernizzi and the members of the CASE management team, it was time for a short presentation on the new parts depot facility before the show began. Customers could see all the machines in action, including CASEs renowned 821F and 1021F Series wheel loader, and what it claims are best in class skid steer loaders (the companys compact equipment range has been warmly received in the region).

This was followed by a full line walk around, where product specialists talked about each of the machines capabilities and innovative technology that is setting very high standards in plant machinery. There was also time for a Q&A, to enable customers to put their questions to the team.

There was plenty of other machines to view at the event. In addition to the wheel loaders and skid steer loaders, there was also its 570T backhoe. According to Case, this machine is considered its base entry backhoe loader machine but is designed with simple technology making it ideal for the tough and challenging market in the Middle East. It also claims that the machine is easy to use and easy to maintain in the market. The 570T is fitted with its own FPT (Fiat Powertrain Technologies) engine, the machine is designed to have the power to perform a full range of operations demanded of a backhoe loader, be it loading or excavating.

With infrastructure projects continuing to roll-out in the region, Case also presented its 885B Motor Grader. This machine is new to the UAE but is a grader that comes with a strong reputation in other markets around the world.

According to Case, the design of the 885B makes grading operations simple and highly productive. The machine once again features a FPT-built engine which is coupled to a fully automatic transmission. The engine features variable horsepower, enabling operators to switch to the relevant power requirement for the task in hand. Case claims that this makes the grader more productive and more efficient. The 4.2m Case-designed moldboard ensures efficient flow of material enhancing productivity in all ground applications.

Following a hard three days around the machines, Case and its invitees were able to relax under the palm trees of the stunning Palmito Gardens within the Jebel Ali Resort, before sitting down to the Gala dinner in its truly glamourous surroundings.

At an event held at Regency Hall, Case and its distributor  its longest running dealer partner in the region – demonstrated their range of equipment to purchasing managers and decision makers from around the peninsula.

On display were models from the Cases heavy and compact ranges, including the Case 821F wheel loaders for the aggregate sector, the SR150 and SR130 skid steer loaders, 570T and 580T backhoe loaders and TX170-45 telehandler. Also on show were two 20-tonne and 37-tonne excavators that compete in the countrys biggest segment, crawler excavators.

The Case Open Day helped us create awareness about our premium line of Case construction equipment and educate our potential clientele about our after sales services, training, parts support and financing solutions, said Raffi Keuylian, general manager of Nasser Bin Khaled & Sons  Heavy Equipment Division. We were able to meet key decision makers and influencers and show them what we can do for their businesses. This was the first time our heavy equipment division has hosted an event of this size, and it will be a trendsetter for our division.