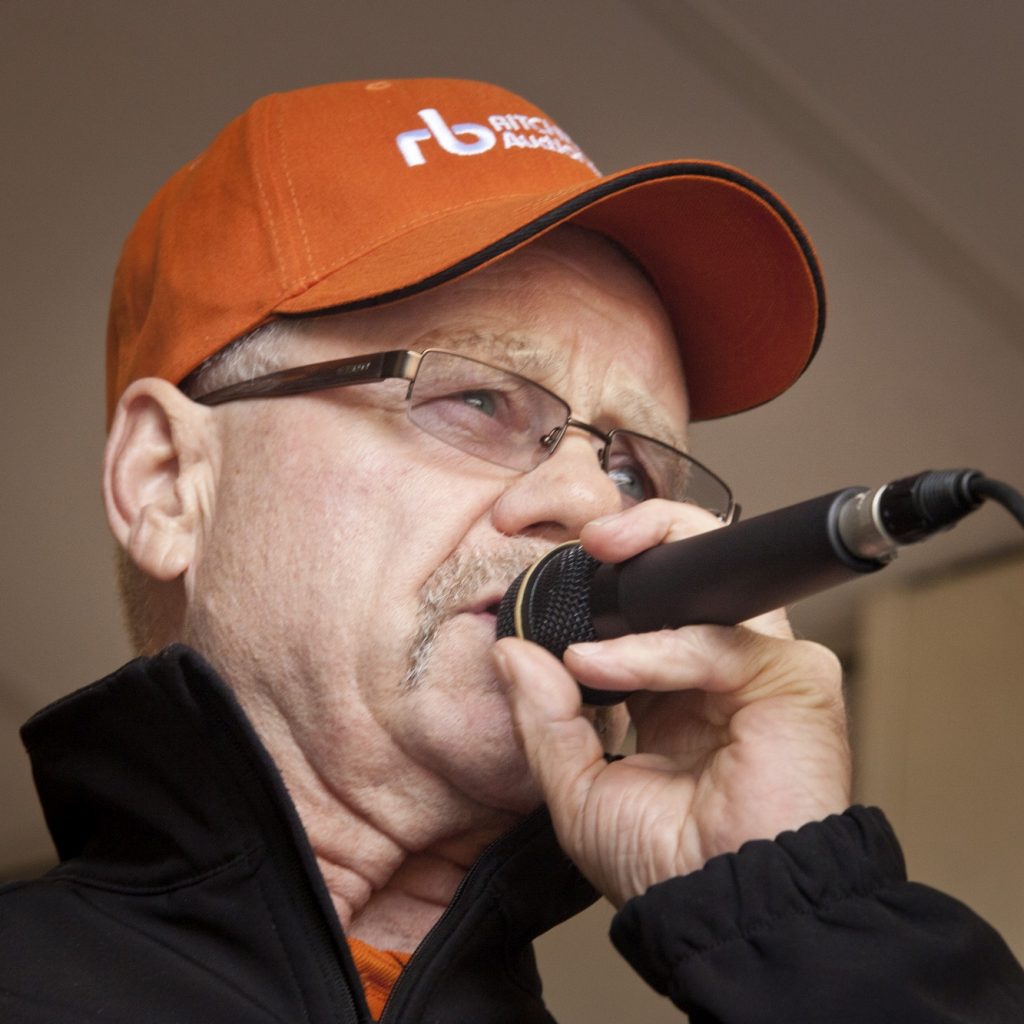 Ritchie Bros. has been in the Middle East for 20 years, but regional manager Eduard Faig is looking forwards not backwards.

Its been a frantic couple of days at Ritchie Bros. last auction of the year when Construction Business News Middle East manages to catch up with Eduard Faig, the regional sales manager for the Middle East, Africa and India. Not only is it one of the biggest auctions Ritchie Bros has ever held at its Jebel Ali home, it has also been an opportunity to celebrate the famous houses 20th anniversary in the region.

The first Ritchie Bros. auction was held in a huge tent in 1997 and the scene in the UAE has changed dramatically since that time. Where once machinery and equipment buyers travelled over the country to purchase their new kit  some industry veterans can romantically recall the early and dusty sales in Ras Al Khaimah  today there are only a handful of opportunities to experience the hustle and bustle of an auction day.

Online auctions, and the global marketplace they access, have also altered the way many owners and plant managers want to sell and buy. They have slowly carved their own niche by providing an almost year-round marketplace and forcing the big auction houses, who have to carry the costs of owning and r unning their facilities, to change their decades-long approach to hosting sales.

Few analysts were consequently surprised when Ritchie Bros hit the acquisition trail to bolster its online presence in 2016. In February, it completed the purchase of Mascus, a listing service and trading platform for equipment dealers and brokers. It also managed to use its muscle to takeover one of the worlds largest web auctioneers via the acquisition of Ironplanet for almost $800 million in August. The deal effectively knocks a major competitor out of the equation and gifts Ritchie Bros. with a platform to be both the biggest traditional and web-based auction house in the world.

It is yet to be seen how Ritchie Bros. will integrate Ironplanets online-only auctions, which offers a reserved daily marketplace and buy-now selling and buying options with the NYSE-listed houses more traditional onsite and unreserved auctions  where you have no guarantee of what your kit will sell for.

Faig tells CBNME that Ritchie Bros. is currently exploring how the two will come together.

Ultimately, the recent purchases of Ironplanet, Mascus as well as a number of regional auction operations offers those wanting to dispose of parts of their inventories a larger selection of buyers than ever before. While both its consignors and bidders are now able to enjoy a global marketplace, Faig stresses that the Middle East is still a region where the onsite, physical auction remains the preferred format for most buyers and sellers.

I think whats happened today and yesterday is a clear example that we do onsite auctions. We had close to 1,000 registered bidders and close to 3,000 people coming here over the two days. Here in Dubai 25% of the purchases go to online bidders. In the company the average is 50%. It is a clear example that here in the Middle East and Africa people love to come to Dubai and inspect the machines. Or they may send some people to come and inspect and they bid online.

When asked whether bidders will continue to prefer to visit in person at such high rates in the years to come, he says that technology is leading to an increase in online sales but we are not watching the inevitable end of being onsite.

People are getting more used to new technologies all the time; thats why every year we improve with new systems like our new interface that we have online  which has been completely renewed. We of course have iOS and Android apps. People in the Middle East are getting used to our timed auctions systems. Right now you can zoom in on machines and have a look at engines, tyres, etc, but who knows in a couple of years youll be able to check in 3D and see any details.

He stops himself for a moment to touch upon a key point that any new technology on the horizon will not deliver.

But for some people (there is nothing like) the touch of the machine, the smell of the oil, to run the machine to see the engine, he remarks. We recommend to everyone to come and inspect the machines. We create an event here.

Faig talks a lot about creating a welcoming atmosphere at the auctions and if you havent yet visited one, then maybe its time you put it on your bucket list. There is certainly something special about the spectacle you can see at Jebel Ali. The callers or auctioneers which orchestrate the proceedings are firing what sounds

like a 100 words per second at those sitting in the main auction hall as we talk.

A great auctioneer can not only speak at machine gun-like speed, they can also read the crowd and be ready to pick up on online bids coming into the fray. Small wonder the job is so specialised that it requires being educated at special schools. Faig tells CBNME that becoming an auctioneer is every bit as difficult as it looks and sounds. It helps that the journey for most of them starts in childhood and they often come from machinery or auction backgrounds.

Even I dont understand them sometimes, he jokes. It takes a long time to become one and a lot of practice. As Ritchie Bros. we always get the best ones.

As the auctioneers shoot lot numbers and bids from their elevated podiums, a noisy train of heavy machinery passes behind. The scene plays out like the noisiest and biggest stage show youve ever seen. It is easy to appreciate why people travel from across the region as well as Africa and Asia to buy here.

Weve had people bidding from Africa, Europe, Asia and the Middle East. We always say at Ritchie that it is a global market, says Faig. Dubai is the hub for Africa, India and the Middle East and the only one we have in those territories. We get consignments from different places across the world not just the GCC. Bringing the equipment to our facilities is always an investment (for sellers) but it is the best way to sell to the world.

He adds: Its also the best place to buy  people are going to come and inspect. Buyers have always come here because they have a need.

Our interview takes place with only a couple of hours remaining in the last auction of 2016. Just a few lots are left  everything goes at an unreserved auction, even if sellers are occasionally disappointed with the price they receive. Faig is happy to tell CBNME that the week has seen some strong sales.

So far we are really happy, its been a really good sale, he chimes before telling CBNME that two of the biggest sales were cranes.

We had a 220t Sany Crane which we sold for $560,000. That was a nice 2013 crane and the highest one we sold; and we had people bidding from different places from across the world like, Africa, the Middle East and South America for the cranes. We also had a 200t Manitowoc tower crane sell for $517,000.

When Ritchie Bros. decided to make Dubai its home in the mid-1990s  the first auction was held in 1997 and its current facility opened in 2000  it was one of the last pieces of a globally spread jigsaw that saw it set-up in Australia, Japan, across South East Asia and Mexico. Since becoming a mainstay in the Middle East market it has experienced both boom and bust periods but throughout it has provided a way of contractors and project owners to free up cash and keep their machinery and equipment inventories moving.

Were the ones where everyone looks at the prices at the auction to see the trends in the market, he says. The market has been a little bit tough, everyone knows that. But were positive thats going to change. You see new projects in the area. Africa is also growing.

the way you financing for equipment. Maybe sometimes there are less projects in some markets, but there are a lot projects coming up in other markets and throughout the world.

Faig, who is three years into his stint in the region, says that Ritchie Bros. uses time between sales to target new consignors and markets to encourage companies to use its auctions to free all-important capital. Ritchie Bros. is playing its part in moving machines from struggling areas to booming ones.

The market is volatile right now but we knew that. So we work hard to get buyers from around the world. We try to target countries that are looking for new projects to get new buyers. These are markets where previously we had less customers there, he comments. One of our main targets here in the Middle East and worldwide is to meet as clients and companies as much as possible. Weve been working hard, doing things in the proper way and increasing and marketing and the number of companies we send information about the auctions to. Weve also been targeting Africa a lot.

In terms of the types of equipment at the December auction, he also notes that Ritchie Bros. saw a small increase of equipment originating from Asia. Another trend he sees is the movement of companies in the GCC trying to free themselves from the financial binds of holding onto large fleets of equipment: You are starting to see more of what we see in Europe and the US such as subcontracting and renting equipment. People are often now just buying for a specific project.

While he is happy to look back on Ritchie Bros. achievements so far in the Middle East, Faig is fixated on the future.

It has been 72 auctions here in the Middle East, weve created an accepted and trusted system in the region 20 years is a nice milestone but we need to look now at the 50 years and 100 years celebrations.

Looking back at 20 years in Dubai

In those days, I worked at Ritchie Bros. as a yard manager and our EMEA team was a lot smaller than it is today, he says. I remember travelling to Dubai and helping out with the first auction in 1997. We rented a yard, which was practically a stroke of desert with a big fence around it. When we arrived on the first day we noticed the fence didnt have a gate and there was no way to get in. It took us hours to get hold of a bolt cutter  meanwhile a huge line of trucks was waiting to drop off equipment for the auction.

There was a great sense of relief when we finally opened up the fence and the trucks started moving. However, the relief was short-lived when the first five trucks got stuck in the sand up to their axles! Luckily it is in the Ritchie Bros. DNA to work together, find solutions and get the job done. And so we did.