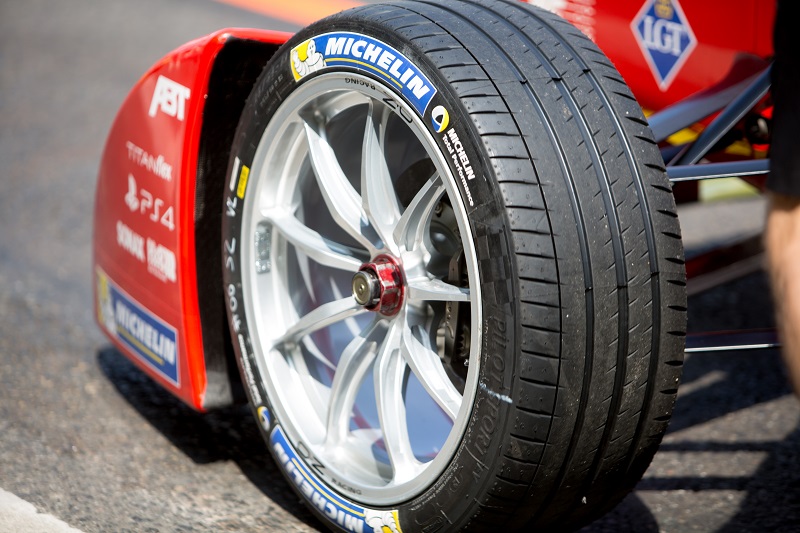 The Michelin Group is committed to making its tires 100% sustainable by 2050 after being inspired by the VISION concept tire introduced in 2017, an airless, connected, rechargeable and entirely sustainable solution.

Today, nearly 30% of the components used in the manufacture of tires produced by Michelin are already made from natural, recycled or otherwise sustainable raw materials.

A Michelin tire comprises of more than 200 materials. The main one being natural rubber, but the many other parts include synthetic rubber, metal, fibres, and components that strengthen a tire’s structure, like carbon black, silica, and plasticisers (resins, etc.).

Incorporated in perfect proportions, these materials interact to deliver an optimal balance of performance, driveability, and safety, while steadily reducing the tire’s environmental impact.

Michelin’s R&D team is supported by 6,000 personnel working in seven research and development centres around the world in 350 areas of expertise. The commitment of these engineers, researchers, chemists, and developers has led to the filing of 10,000 patents covering tire design and manufacturing.

Their work has helped improve tire safety, durability, ride, and other performance features, while improving to make them 100% sustainable by 2050.

The developed technologies go well beyond the world of tires and could be used in other industries, enabling them to benefit as well from recovered raw materials that are infinitely reusable. These technologies will also make it possible to recycle polystyrene and recover carbon black or pyrolysis oil from used tires.

Axens and IFP Energies Nouvelles, the two companies that are spearheading the BioButterfly project, have been working with Michelin since 2019 on producing bio-sourced butadiene to replace petroleum-based butadiene.

Using the biomass from wood, rice husks, leaves, corn stalks and other plant waste, 4.2 million tonnes of wood chips could be incorporated into Michelin tires every year.

Signed in November 2020, the partnership between Michelin and Canada-based Pyrowave can produce recycled styrene from plastics found in packaging, like yogurt pots and food trays, or in insulating panels.

Styrene is an important monomer used to manufacture not only polystyrene but also synthetic rubber for tires and a wide variety of consumer goods. Eventually, several tens of thousands of tonnes of polystyrene waste could be recycled back into its original products as well as into Michelin tires every year.

The revolutionary process developed by French startup Carbios uses enzymes to deconstruct PET plastic waste into its original pure monomers, which can be infinitely recovered and reused to make new PET plastics. One of these recovered plastics just happens to be the polyester yarn used in tire manufacturing. Some four billion plastic bottles could potentially be recycled into Michelin tires every year.

Michelin announced in February 2021 that it will launch the construction of its first tire recycling plant in the world with Enviro.  This Swedish company has developed a patented technology to recover carbon black, pyrolysis oil, steel, gas, and other new, high-quality reusable materials from end-of-life tires.

It will enable everything in these tires to be recovered and reused in several types of rubber-based production processes.

Michelin also supports the circular economy, as attested by its participation in the European BlackCycle consortium. This project, which is coordinated by the Group and financed by the European Union, brings together 13 public and private-sector partners to design processes to produce new tires from end-of-life tires.