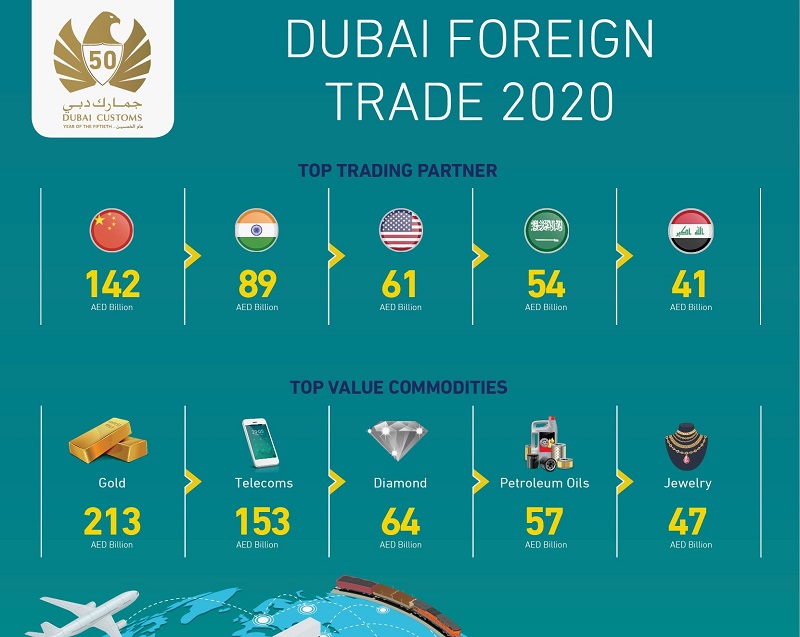 Dubai’s non-oil foreign trade strongly rebounded from the challenges posed by the global economic repercussions of COVID-19 and the suspension of business activity by countries across the world in the first half of last year to record high growth in 2020.

Boosted by its resilience to global headwinds, as well as its rapid economic recovery and revitalised growth in the second half of the year, Dubai’s foreign trade in 2020 touched Dhs1.182 trillion.

Total trade volume in 2020 reached 100 million tonnes, driven by a 6% year-on-year volume growth in the second half of the year. Overall value of exports in 2020 grew 8% to Dhs167 billion while imports accounted for Dhs686 billion and re-exports totalled Dhs329 billion.

“Dubai has set an example for the world in dealing with both the economic and health repercussions of the pandemic. We were able to quickly renew our momentum of growth and re-establish our global leadership in various sectors.”

The external trade sector’s distinctive growth in 2020 will boost the implementation of Dubai’s five-year plan to expand its external trade to Dhs2 trillion, consolidating the emirate’s position as a leading regional and global trade and investment hub.

Dubai’s new international trade map will see an expansion in air and sea navigation routes, with 200 new cities set to be added to the emirate’s existing network of 400 cities.

“In the third quarter, Dubai’s trade surged 34% compared to Q2, and in Q4, trade grew by 7% to DHS326 billion compared to Q3. Trade volumes in the second half of 2020 expanded by 6% compared to the corresponding period in 2019. Overall, 100 million tonnes of goods were traded in 2020, which reflects the rapid recovery of this sector.”

Adding further, he said: “This rebound is now spurring greater growth in 2021. The resumption of trade with Qatar, the start of trade engagement with Israel, the positive spin-offs from hosting Expo 2020 and the launch of the Dubai 2040 Urban Master Plan will all contribute to accelerating the emirate’s growth momentum.”

China maintained its position as Dubai’s largest trading partner in 2020 with Dhs142 billion worth of trade. India came in second with Dhs89 billion, followed by the US in third place with Dhs61 billion. Saudi Arabia continued to be Dubai’s largest Gulf and Arab trade partner and its fourth largest global trade partner with Dhs54 billion worth of trade, followed by Iraq in the fifth place with Dhs41 billion.