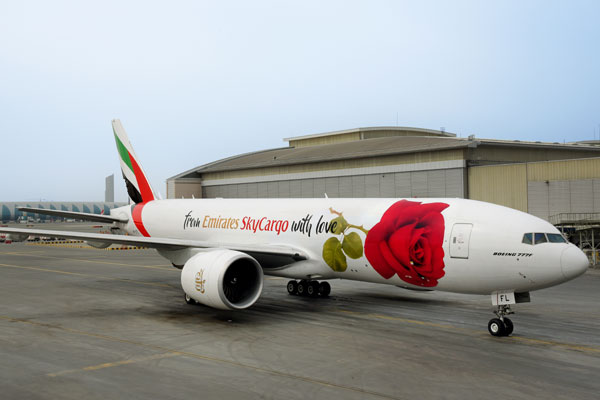 Emirates SkyCargo, the freight division of Emirates airline, has unveiled a unique decal featuring a rose on one of its Boeing 777-F freighter aircraft ahead of the Valentines Day.

The decal, installed at the Emirates Aircraft Appearance Centre in Dubai, is the first of its kind for Emirates SkyCargo and highlights the strong contribution made by the air cargo carrier to the floriculture industry through the transport of fresh flowers across the world, it said.

Every day Emirates SkyCargo transports fresh flowers across its global network of over 150 destinations. This includes the flowers transported on board dedicated freighters from major flower exporting countries such as Kenya and Ecuador directly to Amsterdam, as well as flowers transported in the belly hold of the aircraft from countries as far and diverse as India, New Zealand, Vietnam, Zambia, and Ethiopia.

Between January and December 2016, Emirates SkyCargo transported over 70,000 tonnes of fresh flowers around the world, the company said.