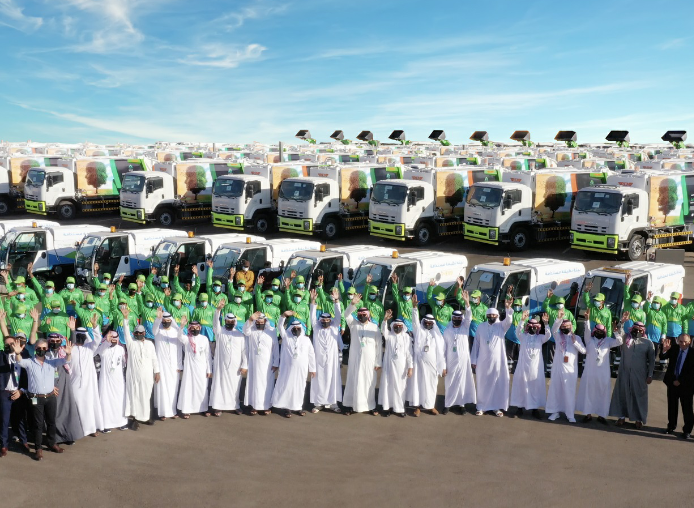 Bee’ah, the Middle East’s award-winning sustainability pioneer, commenced operations in the Kingdom of Saudi Arabia after securing a contract to service the holy city of Al-Madinah Al Munawarrah, marking the milestone with a launch ceremony showcasing its superior fleet and advanced equipment that will be deployed in Madinah.

During the event, Fahad Shehail introduced and explained Bee’ah’s activities under the three contracts for waste management services in Madinah’s North, West and East regions that were signed back in August and highlighted the company’s scope of services in Madinah for 1.2 million people.

Contracted by Madinah Regional Municipality, Bee’ah will provide solid waste collection and transport services along with disinfection and sanitisation of 40,685 waste bins. Bee’ah’s started operations this month, with the utilisation of over 3,000 workers and 488 pieces of heavy equipment and fleet of vehicles including waste collection units, street sweepers and disposal trucks. Bee’ah will also conduct training sessions, workshops, and awareness campaigns for the public to encourage community recycling efforts.

As the region’s first fully integrated environmental management company, Bee’ah is deploying its end-to-end waste management solutions in the Kingdom based on the twin pillars of sustainability and digitalisation. The goal is to provide a comprehensive roadmap for waste services, helping transform Madinah into a sustainable city of the future.

HE Salim Bin Mohammed Al Owais, Group Chairman at Bee’ah, said: “Bee’ah has established itself as the Middle East’s leading waste management and environmental services company, and our reputation has led to Bee’ah’s rapid expansion across the UAE, Egypt and now in the Kingdom of Saudi Arabia. It is an immense honour to be selected as the waste management partner for Al-Madinah Al-Munawarrah and help Madinah Regional Municipality achieve its zero-waste targets through world-class operations and best practices.”

HE Khaled Al Huraimel, Group CEO of Bee’ah, said of the launch: “Bee’ah’s mandate has always been to raise a more sustainable quality of life for the communities that we serve, and this is backed by a commitment to excellence. Bee’ah stands ready to support Madinah Regional Municipality to drive a more sustainable quality of life for its citizens and residents. At our launch, we showcased the superior capabilities of our fleet and workforce to serve the Kingdom of Saudi Arabia and the communities of Al-Madinah Al Munawarrah, commemorating the start of our operations in this historic city.”

The partnership with Madinah Regional Municipality to work toward a sustainable future for the city comes as Bee’ah closes in on its zero-waste objective in Sharjah, UAE. Having already achieved the Middle East’s highest waste diversion rate of 76 percent in Sharjah, Bee’ah is also building the UAE’s first waste-to-energy plant in a joint venture partnership with Masdar. Upon completion in 2021, the Emirate will reach 100 percent waste diversion from landfills, to become the first zero-waste-to-landfill city in the Middle East.

A ten-time winner of the Sanitation and Waste Management Company of the Year award in the Middle East, Bee’ah’s approach to holistic and integrated waste management includes advanced recycling facilities housed at its Waste Management Complex in Sharjah. Bee’ah has also digitalised its waste management services through WastePro+, a fully integrated artificial intelligence (AI) digital solution to streamline its operations from waste collection to treatment and disposal.

In the UAE, Bee’ah serves the emirates of Sharjah and Abu Dhabi and notable commercial clients in Dubai such as Dubai Airports, Emirates Group, Burj Khalifa and Dubai World Trade Centre.