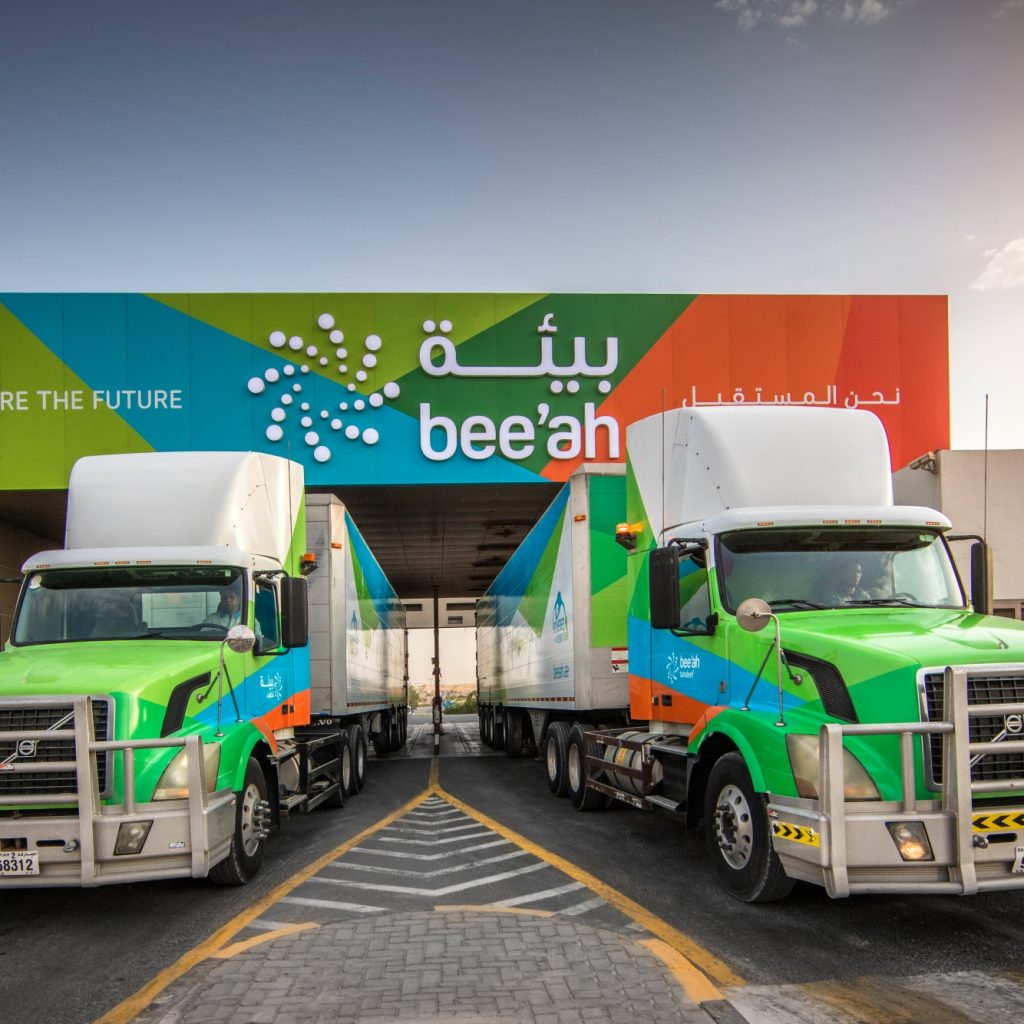 Expansive views of a true-blue Khalid Lagoon are the first thing that greet you as you step into the sunlit conference room at the current Beeah Sharjah office.

Well soon be moving to our new headquarters, mentions Khaled Al Huraimel, group CEO, Beeah. An office that is set to be a true benchmark for all sustainable projects coming up in the region.

Beeahs new 7,000sqm headquarters, located on a 90,000sqm site adjacent to the Beeah Waste Management Centre, is said to further bolster Beeahs image as an organisation that not only aims to manage and reduce waste, but to also create an environment fit for the future. The site was commissioned to renowned architecture firm Zaha Hadid Architects, following a 2013 international competition.

Established in 2007 as a public-private partnership, Beeah began its journey as an environmental management company for the emirate of Sharjah, with just 40 employees under its wing. Today, it boasts of a workforce of more than 7,000 employees, all dedicated to making the world a better place to live in, one initiative at a time. It has expanded its business to other parts of the UAE, with municipal service contracts for the regions of Dibba, Mleiha, Kalba, Al Madam, Hamriya, Khorfakkan, and Al Batayeh. Beeah also holds the contract for Abu Dhabi Lot 1, formed through a partnership with Tadweer, the Centre of Waste Management, Abu Dhabi, the largest municipal contract outside Sharjah.

Did you know: The word Beeah means environment in Arabic. We initially focused all our efforts towards reducing waste, says Huraimel. Waste is a big problem in the region, with one of the highest rates of waste generation per capita in the world, at 2.5kg per person, per day. The emirate of Sharjah alone has a population of 1.4 million people, and the total amount of annual waste is almost three million tonnes.

The issue is a definitive cause for concern. A Frost & Sullivan study predicted that total waste generated by GCC was set to increase from 94 million megatonnes (MT) in 2015 to as high as 120 million MT per annum by 2020. The report also highlighted that GCC is not equipped to handle this level of waste generation through the existing landfilling strategies, and adoption of alternate handling mechanisms to deal with the problem of increasing waste was required.

Huraimel remarks: Beeah is owned 50% by the Sharjah City Municipality, and 50% by the private sector, the reason being that we wanted the public sector to continue to play a key role in the success of meeting the objectives.

Today, Beeah is the only integrated waste management company in this region we dont just collect the waste and clean the streets, we also manage landfills, segregate, and recycle the waste. We also convert waste to energy. Weve set a zero waste to landfill target for Sharjah, out of which weve already reached just over 76%, which is the highest diversion rate of waste away from landfill in the Middle East.

Beeahs employees consist of both trained professionals, as well as individuals who are later trained on site. Huraimel comments: When we first set up, we brought the expertise from abroad, signing contracts with governments from Europe, for example the Netherlands, one of the most advanced countries in waste management. We signed an MoU with the Netherlands government, and did the same thing with Novo Scotia, Canada. Over time, we started building our own expertise and now most of our expertise is in-house. The UAE market and the Middle East market, in terms of waste, is different than other markets. Hence, we do not copy other markets, we adapt to what is required. Thats why weve been very successful.

Huraimel continues: We handle all types of waste from municipal solid wastes, to residential wastes, to medical wastes, tyres, we manage it all. Our waste collection and street cleaning arm Tandeef collects waste from all parts of Sharjah, and brings it to our Waste Management Centre (WMC) in Al Sajah. Tandeef also operates across the emirates of Dubai, Abu Dhabi, and Ajman; some of its most notable clients include Burj Khalifa, Dubai World Trade Centre, TECOM, and Marina Mall. In 2015, Beeah launched the Tandeef smart eco-fleet, that are low-noise, collect and clean bins simultaneously, and run on compressed natural gas (CNG). Other smart features include ‘smart routing’, a GPS-mapped system that features the dispatch on demand (DOD) option; and ‘smart bins’, which senses the waste inside the bin and sends dispatch to vehicles per sector for collection. The bins are collected when they’re full, or in case of non-full bins, the collection is performed within two days to avoid insects and unsanitary bins. The landfill site at Al Sajah was transformed in 2009 to a sophisticated safe disposal site that allows for systematic segregation and waste processing. As step one, the waste is direction to the Material Recovery Facility (MRF), the Middle Easts largest and worlds third largest such facility. Here, recyclable materials are segregated from municipal waste, via mechanical and manual processes. The MRF processes over 1,000 tonnes of general waste daily, of which an estimated 67% gets recycled and thus diverted from the landfill. The recyclable materials are carried forward; the WMC includes a number of recycling amenities, allowing for proper handling of all waste materials. These include facilities for tyres, construction and demolition waste, medical waste, liquid waste, medical waste, cars and other metal, e-waste dismantling and processing, and a compost plant.

Huraimel explains: Our tyre recycling facility is one of the most advanced in the region, using cryogenic technology. The tyres are converted to crumb rubber, which can be used in playgrounds, jogging tracks, rubberised asphalt roads, etc. Plus, given the scale of infrastructure projects in the region, our construction and demolition facility processes that waste into five different aggregates or sizes, which is used in infrastructure projects and roads, recycling it almost 99%.

Wekaya, established in 2011, is a premier facility to recycle medical waste, established through a joint venture. Our car and metal shredding & recycling facility is for end-of-life vehicles, where we process, shred, and segregate the metals, and reuse. In addition to that, were building several new facilities, for PET plastic and wood recycling.

Ventures of the future

The Abu Dhabi Sustainability Week (ADSW) 2017 saw Beeah and Masdar, the Abu Dhabi Future Energy Company, come together to establish renewable energy projects, launching the Emirates Waste to Energy company (EWTE). The company is the first of its kind in the region, and its first project is the Sharjah Multi-Fuel Waste to Energy Facility, capable of diverting over 300,000 tonnes of unrecyclable waste away from landfill every year. The facility will incinerate over 37.5 tonnes of waste per hour to deliver 30MW of clean energy to the Sharjah power grid, thus meeting the needs of thousands of households. Apart from waste management, the organisation is also pushing into the sectors of air and water management; seven air quality monitoring systems have been installed at sites across Sharjah, and water studies are being conducted for local bodies Al Khan and Al Khalid to identify contaminants.

Beeah was created to tackle all environmental challenges, remarks Huraimel. We are more concerned with the quality of life, which comes from a clean environment, clean water, clean air, and technology. As a first step, we want to understand the level and state of quality of air, and then put plans with the authorities to improve that quality and reduce emissions. Just like we have a target for zero waste, we also have a target for quality of air in the city and the emirate. Well do the same thing with water.

More recently, and achieving another first in the region, Beeah signed a deal with Tesla at the World Future Energy Summit in Abu Dhabi, announcing an order to purchase 50 Tesla Semi heavy duty electric trucks. The trucks enter production in 2019, and will primarily be used for waste collection and transportation, including transport of materials for recycling.

Tandeef has over 1,000 vehicles, which we are aiming to slowly convert to a green fleet, comments Huraimel. Were the first company in the region to order the Tesla trucks, which just shows the drive we have for creating a sustainable environment and a circular economy, and its not just about collecting waste; were looking at it as a complete cycle.

Autonomous technology will enable multiple Tesla Semis to “platoon”  that is to travel in convoy with just the lead truck digitally controlling the others. In addition, on-board sensors will detect instability during travel, and automatically make adjustments to vehicle torque and braking to prevent dangerous “jackknifing”. The trucks will be used by Beeah alongside existing electric vehicles, as well as those that currently run on CNG and bio diesel, in addition to the boats that use solar energy while cleaning water bodies. Beeah has also partnered with a number of US-based companies specialised in transforming diesel-powered vehicles into electric ones, to help contribute to better air quality.

Tesla has also been commissioned to provide their advanced power-pack battery technology, with a total capacity of 1,890 kWh, for the new Beeah headquarters.

The new headquarters firmly flaunt Beeahs core principles to operate entirely from renewable energy sources and move towards zero waste, as well as increase their educational outreach. The interiors have been designed to allow natural sunlight to stream in, while simultaneously minimising the amount of harsh light affecting visitors and administrative spaces. All power required for the building will be generated via low and zero carbon sources, principally from the adjacent Beeah Waste Management Centres conversion of municipal waste (that would otherwise decay in landfill) into energy, together with large arrays of photovoltaic cells incorporated within the sites landscaping. More so, Beeahs expertise and experience of recovered water recycling for non-potable use has enabled the design to be developed for exceptionally low potable water consumption. Beeah has constantly strived to reach out to the general community and to educate them on the benefits of recycling, with programs such as Beeah Rewards, utilising the Reverse Vending Machines (RVMs). Community members are encouraged to deposit their aluminium cans and plastic bottles in the RVMs. Each time a recyclable is deposited, the RVM issues a receipt with a unique barcode, which the user scans through the Bee’ah mobile application, qualifying them to enter the Bee’ah Rewards monthly draw. Bee’ah’s mobile app also encourages recycling in the community by identifying the nearest recycling point, in addition to providing easy access to services like ‘You Call, We Haul’, where people can contact Bee’ah to collect and recycle their bulky waste.

Huraimel says: Every year, we do a lot with the public, from awareness programs, to managing events to sponsoring events, to working with schools and universities; were extremely active on this front. We have the Beeah School of Environment, designed to help school teachers and instruct students on environmental responsibility. We also have the Sharjah Leadership Programme, which is a Sharjah-wide programme, for which we are the main sponsor and we work very closely with the Sharjah Tatweer Forum on that project. To also help before the waste reaches our site, we do a lot of segregation at the source. Sharjah was the first city to do residential recycling programs. All the residential areas in Sharjah now have the blue and green bins, and you can see the three-stream bins in all public places.

The uniqueness of Beeahs approach and consistent drive towards excellence has helped the company to make rapid progress towards its goal of elevating Sharjah, to the position of environmental capital of the Middle East. Beeahs success lies in the guidance of its visionary leaders and in the tireless efforts of its workforce.