On the right track: Middle East Rail in review 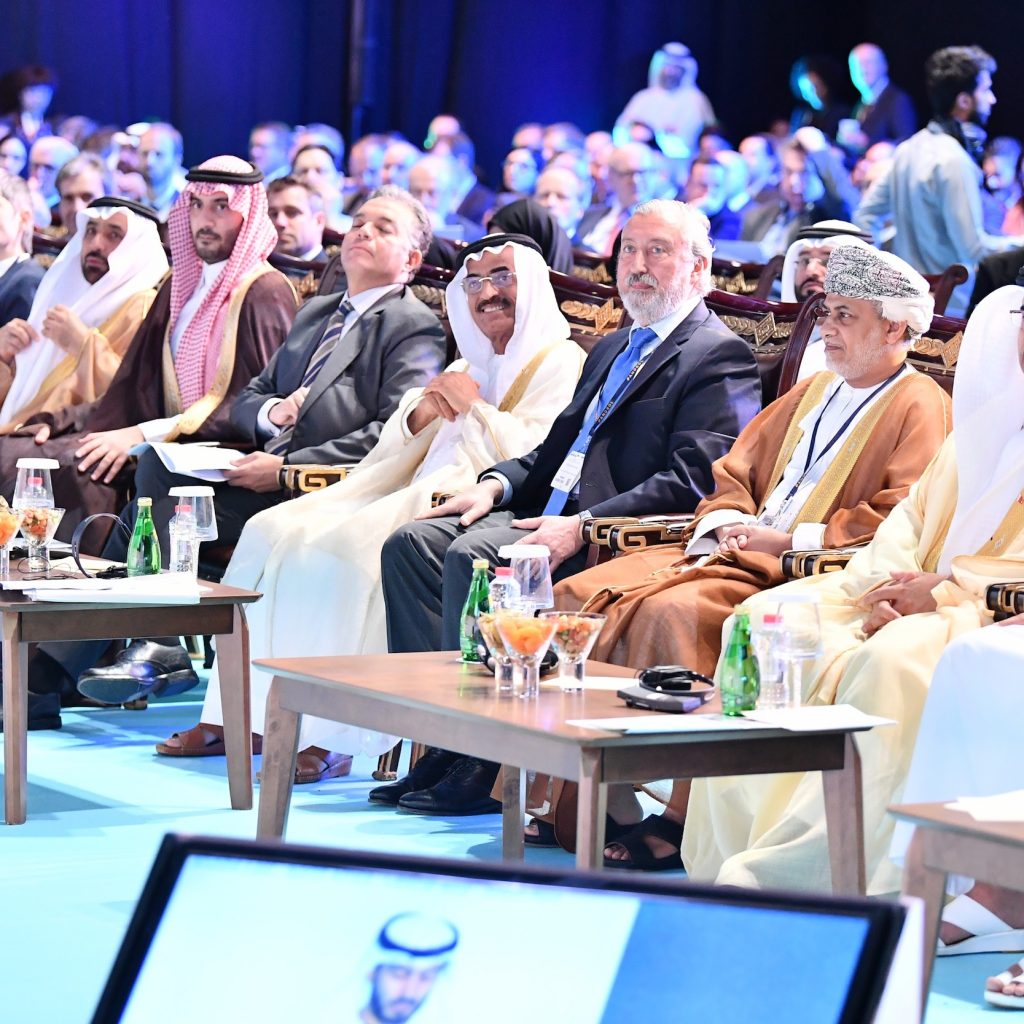 The 12th edition of Middle East Rail saw over 290 regional and international railway operators, suppliers and contractors come together to discuss the latest industry trends and showcase their best solutions and innovations. The exhibition took place between 12  13 March, at the Dubai International Convention and Exhibition Centre.

The event was held under the patronage of HH Sheikh Mansour Bin Zayed Al Nahyan, Deputy Prime Minister, Minister of Presidential Affairs, UAE, in partnership with the Ministry of Infrastructure Development and the Federal Transport Authority  Land and Maritime.

During his keynote speech, Sheikh Mansour said that the UAE had established itself as a global player in the transport infrastructure sector  a sector that plays an important role in any nations progress. He also expressed his pleasure at the growth in the number of participants at this years event, as well as the keen interest shown by key decision-makers in the railway industry.

He then highlighted the fact that the UAE government had developed a clear vision, as well as a carefully-planned strategy, to play a leadership role in the field of rail transport infrastructure. This will be achieved through regional and international collaborations, developing and re-shaping policies, and enacting laws to promote efficiency as well as safety in this vital sector, he said.

The 2017 edition of Middle East Rail saw key focus on the financing options for GCC Railway, a $200bn potential megaproject connecting the Gulf states of Saudi Arabia, Kuwait, UAE, Qatar, Bahrain, and Oman. Approved by the states in 2009, the original completion date for the rail network was pledged as 2018; Saudi Arabia was the only country at the moment to have any rail infrastructure. The deadline was later pushed to 2021. UAE completed the 264km stage one of its Etihad Rail network, connecting the Shah-Habshan-Ruwais route, in 2014.

However, by 2016 work had slowed down or come to a complete halt in Oman, UAE, and Qatar. In January 2016, Etihad Rail officially announced that it had suspended tendering for phase two of the national rail network. This stage involved the construction of a 628km-line  from Ghweifat on the Saudi border to the Omani frontier near Al Ain, with links to the UAE’s three principal portsKhalifa, Jebel Ali, and Mussafah. UAEs Minister for Infrastructure Development Dr Abdullah Belhaif Al Nuaimi commented on the halting of phase two, saying that it “was logical because you simply cannot build your part and wait for others to start”.

In February 2018, the UAE Cabinet approved a new Federal Railway Law that provides a regulatory framework for future development of railways. The new law is expected to pave the way for private sector participation in railway projects in the emirates. Both UAE and Oman are currently focusing on developing their internal rail networks.

Dr Abdullah Salem al-Kathiri, director general of the Federal Authority for Transport Land and Marine announced at a press conference at the Middle East Rail 2018 that all six GCC countries are moving forward with national rail plans which include links to neighbouring states.

In attendance at the 2018 show were a number of key exhibitors, including Indian Railways (who showcased $140bn worth of current and future rail projects that the Indian government is building to upgrade countrys urban transportation network), Serco, Alstom, Greenbrier Companies, Siemens, CREC, CRRC, AECOM, Progress Rail and Department for International Trade UK.

The provider of the Dubai Tram and the leader of the ExpoLink consortium for Route 2020 project of the Red Line extension of Dubai Metro Alstom highlighted eight new technologies with the power to transform mobility in the Middle East now  or in the very near future.

Among the solutions Alstom presented on its booth, are Alstoms Urban Integrated solutions; Citadis Range; Mastria, the orchestration of all public transport modes from rail to road; Ecodesign: sustainability in mobility from manufacturing to recycling; Aptis: the premium passenger experience inspired from the tram, HealthHub and more. The core components of hyperloop technology have been around for a long time, nearly five or six decades. What were doing now is bringing together the various components like vacuum, levitation, propulsion, altogether, enabling us to create a brand-new form of transport for the 21st century.

Hyperloop technology, explains Dhaliwal, is a cross-over of different sectors. It learns not just from the rail industry, but also from aerospace, space, and high-speed rail, bringing it all together in a new, consolidated form of transport, aimed at changing the way transport is perceived forever. During the unveiling of the Hyperloops concept model in Dubai, Abdul Reda Abu Al Hassan, executive director of Rail Planning and Project Development at RTA, said the project is expected to be operational within the next five years. People were especially excited by the fact that travel time between Dubai and Abu Dhabi could potentially be cut down to 12 minutes.

Why I really enjoy hyperloop is because everybody is so excited by it, remarks Dhaliwal. Everybody wants it. Ive never worked in an organisation where the public are willing you to get a project done so fastand this is coming from someone whos worked in transportation all his life. Most projects tend to have protesters, asking us to get rid of it. I have never seen so much support for a technology in this sector.

Dhaliwal claims it is difficult to put a date on when the hyperloop will precisely be open to the masses, but he believes in seven years from now, from the proof of concept (PoC) mode, a concept facility will be up and running somewhere in the worldperhaps even in Dubai.

Early this year, Virgin Hyperloop One founder Richard Branson unveiled plans to implement a hyperloop system in India, connecting Pune and Mumbai, with a goal of cutting down the travel time between the two cities to 25 minutes. India is an amazing story for us. Weve established our base here in the Middle East, and well continue to push our growth here. But were also keenly looking at other areas in the world, and India is a fantastic opportunity area, which we really started to focus on in Q3-Q4 of 2017. We carried out our global challenge event, and built off that.

In July-August onwards, we started seriously engaging with governments and state governments. We started to talk to those states that were prominent in our global challenge event. We basically saidwhere would you want the hyperloop? So via that competition, we were able to narrow it down to where we should focus our resources.

We signed an MoU with Andhra Pradesh, as well as Bangalore (Karnataka), and with Maharashtra. We then engaged these states by carrying out preliminary feasibility engineering studies, and started looking for potential in their corridors.

The state government in Maharashtra was very proactive, and wanted to explore the opportunity between Mumbai and Pune very, very quickly. Pune-Mumbai is one of the densest corridors in India, and so from a transportation perspective, its very important.

The six-lane Mumbai-Pune Expressway is one of the most saturated toll-highways, clocking in journey times of nearly three to four hours on a single trip. Dhaliwal adds that with the rising, strong middle-class economy, which is very focused on technology, Mumbai-Pune becomes the ideal transport hub.

The proposed hyperloop route will eventually support 150 million passenger trips annually, saving more than 90 million hours of travel time. The system, boasting the capability to travel up to 1,000km/h, will also have the potential for the rapid movement of palletised freight and light cargo, creating a robust backbone for on-demand deliveries, supply chains, and next-generation logistics. Steve Cockerell, industry marketing directorroad and rail, of Bentley Systems discussed the presence of the American-based software development company at the event.

We are here both as exhibitors, as well as the sponsors of the networking club. Weve been involved with Middle East Rail from the very first year that it was held, seeing it grow from the 80 delegates and five exhibitors to the grand spectacle it is today.

This year, were here on the third occasion under the British pavilion, in the InTech area. We have a very strong presence in the UK, which is our rail heartland, where our solutions grew from green shoots to the mature solutions that you see today.

The region (Middle East) continues to be a vibrant and exciting area. My job allows me to go events in most places around the world, and the Middle East strikes me as one of the most innovative and aspirational areas to work in.

OpenRail builds on 30+ years of proven ability and accomplishment in the rail market for Bentley, remarks Cockerell. Mainly during the design or construction phase, but also into operations and maintenance. OpenRail brings all of that together.

Cockerells presentation at the show covered the finer aspects of OpenRail, highlighting how information is at the heart of it. The organisations involved in designing, building, and operating rail infrastructure are dealing with more and more data every day; its the same in society. Our solution is focused on managing that information, and providing the right tools to create the designs and information required to build the roads, railway, bridges, stations, so forth.

Most importantly, we are able hand over all the information to the owner, so they can use it as the basis for making more informed decisions during the operations and maintenance phase.

Cockerell mentions that companies in the region, such as Dubai RTA, are using the ProjectWise solution offering (a part of OpenRail) for design collaboration.

A lot of the supply chain here, the consultants and contractors, are using our OpenRail Design technology, which has come from Bentley Rail Track and Power Rail Track. OpenRail is the latest evolution on that journey.

XRail Group offers full-turnkey project solutions for the rail sector, from design, installation, testing, commissioning, and maintaining the project for the client. The UK-based company has worked on the London Underground network, given the expertise it holds in the form of engineers well versed with the London Underground infrastructure, as well the Thales TBTC System. Steve Hall, S&T manager at XRail, remarks: Weve started to move into the Middle East; weve done some work in Dubai already, on the Dubai Metro, and we have some significant more work to come in the region.

In 2016, XRail was awarded a key contract by AECOM, to undertake the installation and testing of a remote conditioning monitoring system for Dubai Metro. The system was based on prior studies to help estimate the future patronage and trends for the system between 2016 and 2020.

Commenting on the companys presence the event, Hall says: We do shows not just in Dubai, but also in the UK and other parts of the world. And while we may not be showcasing anything specific this year at Middle East Rail, were here to meet our clients, for whom we provide the full package.

A lot of companies will either do the installation for you, or the testing, or design we do it all. The client avoids the hassle of dealing with four or five separate companies, since we can do the entire project from them on our side.

Middle East Rail has helped shaped the regional rail industry for over a decade through knowledge sharing, educating the market and facilitating influential meetings. The show serves as a platform for industry experts to identify problems, propose solutions, collaborate and harness innovative technologies in the railway sector.