Reversing a culture of construction waste 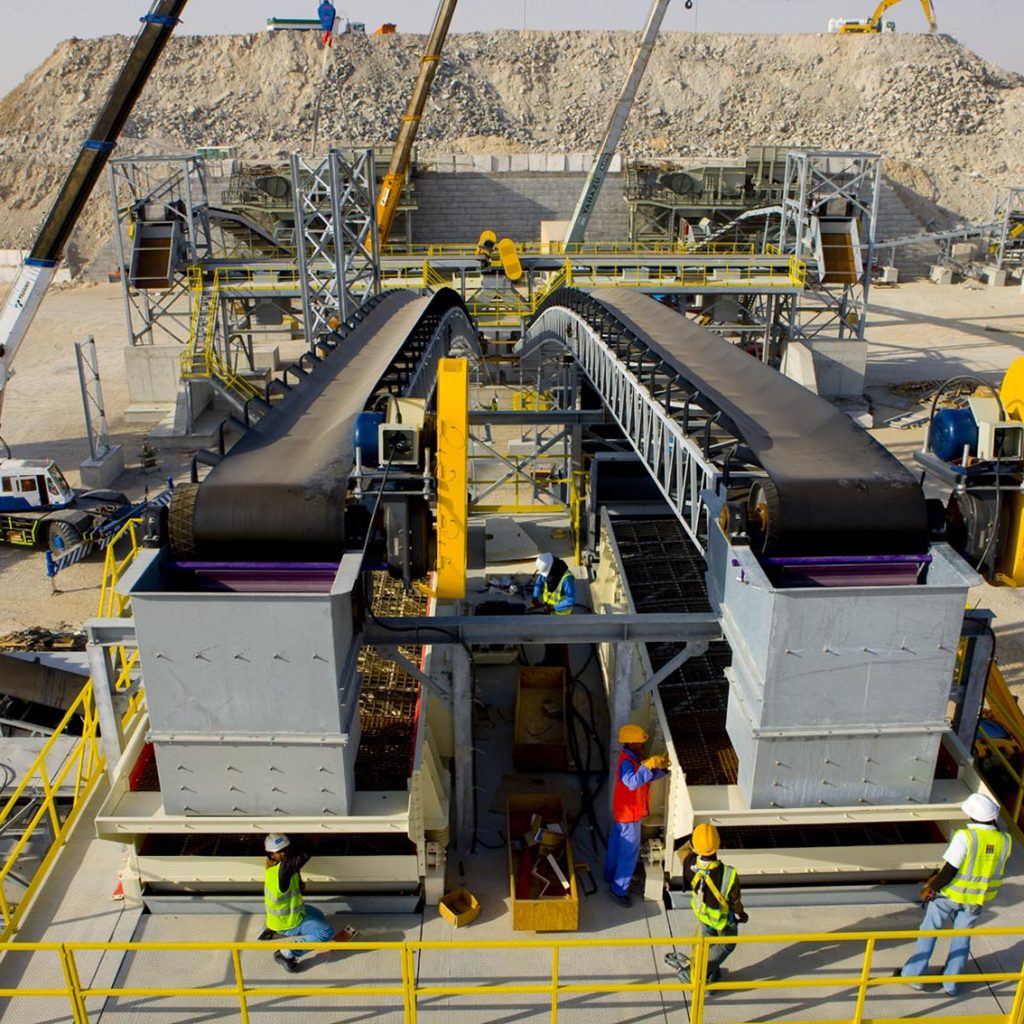 Reports suggest that of the approximately 120 million tonnes of waste currently produced in the GCC countries, 55% is from construction and demolition. As Abu Dhabi Sustainability Week gets under way, Construction Business News looks at how the GCC and wider Middle East can change its ways

Research has found that more than half of the GCC’s total waste – which stands at 120m tonnes annually – is produced by construction and demolition (C&D). However, that could all be about to change as Tadweer sets out a new roadmap to not only reduce waste in Abu Dhabi, but take the message of waste reduction across the GCC with the Waste Management Master Plan.

The issue isn’t entirely confined to the GCC; C&D debris represents the largest proportion of waste in the Middle East. Limited C&D waste management regulations in the region, compared to other countries, have resulted in the accumulation of the C&D waste in landfills. Yet experts in waste management say that recycling C&D waste can conserve raw material, energy, and water, as well as reduce the production of greenhouse emissions and other pollutants that can contribute to climate change.

According to Tadweer, C&D waste recycling can even preserve natural resources and support the local economy through the marketing of recycled C&D material which is much cheaper and has the same quality as the raw material and can be used in infrastructure projects.

The Waste Management Master Plan, being developed by Tadweer for Abu Dhabi, includes studies about the best practices, laws and policies related to waste management and the best cost efficient waste processing solutions. The Plan’s outcome will also propose methods to reduce commercial and industrial waste and raise awareness about the importance of reducing waste especially that of construction and demolition.

“Construction projects are rapidly increasing in the region with Expo 2020 preparations in Dubai, and the World Cup 2022 to be hosted in Qatar. With these developments, municipalities across the GCC are recognizing the need for robust strategies to minimize the negative impact of large amounts of C&D waste,” says H.E Eisa Saif Al Qubaisi, GM of Tadweer.

Speaking ahead of the launch of Abu Dhabi sustainability week later this month, Dr. Salem Al Ka’abi, deputy GM of Tadweer, and Head of the EcoWaste 2016 Committee, said: “The Waste Management Master Plan was established to help position Abu Dhabi as a global leader in waste management and sustainable resource policy development.”

“As part of the master plan, despite the growth in C&D waste that increasing construction projects are likely to cause, we are aiming to reduce C&D waste levels. We hope to demonstrate how efficient C&D waste recycling can have a positive impact on the region’s environment, society, and economy during EcoWaste 2016.”

The long and short

While the waste caused by building supplies and hazardous materials is one part of the environmental puzzle, waste can also take on many other forms and affect a business’s bottom line.

The industry average for waste on any individual project, stands at around 2.5% to 5%, however recently, and specifically in the GCC, this has begun to creep as high as 15%, once waste of labour and equipment is factored in.

In terms of doing business, it’s a significant margin to lose considering the ease with which it could be reduced.

Hassan Dajani, who heads business development for Bentley Systems in the region, says: “It is becoming a major problem and it’s down to the lack of communication and lack of collaboration; not realising how the final design may look and feel, and demolishing something only to do it again. This wastes man hours and other resources.”

Such processes are the byproduct of a culture of waste across the GCC; whether that is rooted in the false economies of parts, energy costs, labour, equipment or, simply, all of the above, is yet to be deciphered. What is known is that the culture must be reversed.

And change is happening. In recent months both Dubai and Saudi Arabia – the most active construction markets in the region – introduced PPP laws, which while far from waste regulations will keep a tight handle on budgets, causing a trickle-down effect that is hoped to increase transparency and efficiency in a range of projects.

However they will need management tools to execute the change and it is this which brings the waste management debate back full circle to BIM.

Dajani comments: “People are realising that technology is here to stay and it can save you money. Especially in PPP projects. You have people with different experiences and interests and they come together to make a profit so if they realise they can do something faster and with a greater profit margin, they should be doing it.

“I have said this many times before. It isn’t about if you adopt technology tools, but when. If you want to be competitive you have to use technology.”

And it isn’t just the building materials, today even interior materials are under the spotlight and design communities are engaged in the benefits of BIM, and maximizing the efficiency of a project, as well as performance of an asset.

The effects of this culture of logic are multiple and varied and mirror those of BIM and collaboration software development.

“As you can tell from living in the GCC, projects are becoming larger and more complex. It is very common to collaborate on a project with specific team members across the globe so you can get the best specialists in any discipline and work remotely on these projects.”

However, collaborating badly, causes more problems than it solves and they usually contribute towards the upward trajectory in waste costs.

Dajani says: “BIM is a term, but those who really have control of their project and what they are building understand the entire asset lifecycle information. Owners may consider it a cost but they are focusing on CAPEX, not OPEX.

“If you are building something virtually you can superimpose your design model over what you are actually building by holding the iPad up to the ceiling and then seeing the MEP behind the brickwork. This won’t only save money but it might save lives.

“Technologies like laser scanning and concrete structure allows you to capture what is there from simple photographs and make operational decisions without physically demolishing anything. If you don’t know these things exist you’re left behind” he adds.

For Dajani, the solution is “optioneering”, creating thousands of project drawings via software to means test the design and project coordination.

“When we talk about the role of technology in [reducing waste], I believe it can help tremendously in completing projects. It allows people on a team to collaborate virtually from anywhere in the world.

It simulates construction to determine the use of any heavy piece of equipment or machinery; it allows project managers to know for sure if they need a certain material or product, or even a piece of machinery in a certain place. The worst case is having too much equipment sitting idle and that is a form of waste,” he adds.”

The methods by which construction waste can be reduced are limited, but varied (see box). They are also somewhat surprising with a survey by Frost and Sullivan naming Landfill as the least preferred method of waste disposal.

However, one method could be coming into its own over coming years, tackling both C&B waste reduction and also greenhouse gas emissions.

The GCC’s waste-to-energy (WTE) market has been sustaining a 20 to 25% growth rate, since 2012, in light of the region’s intensified efforts to adopt more sustainable, long-term waste management and recycling solutions.

The flourishing WTE sector in GCC is opening up significant opportunities for industry players and infrastructure development is already underway, with WTE projects in the pipeline and set to produce between 300 and 500 megawatts of power by 2020 – approximately 10 times more than the current WTE production estimates.

A diversification into WTE could also help meet regional electricity needs, which are growing 8% YoY.

When it comes to reusing materials, one firm has been bringing bright ideas to the table for a number of years.

Speaking on the launch of his firm’s new carpet recycling scheme (see box), Andre Dulka, ME regional director of carpet manufacturer, Desso, said: “According to Dubai Municipality, the emirate produces around 7,000 tonnes of general waste each day – the equivalent of nine Olympic-sized swimming pools – of which, 35% of the total generated waste sent to UAE landfills is considered to be recyclable, there is a clear need for companies as well as individuals to do more to reduce this figure.”

The city’s Al Qusais municipal landfill is predicted to reach full capacity by 2021 and the municipality is preparing to implement a series of new measures designed to address waste management under the 2030 Masterplan.

These include a ‘polluter pays’ weight-based charging system, a waste tracking system and mandatory source segregation; with the collective goal of reducing landfill destined waste by 25% by 2020.

Essentially, if industry is to tackle waste effectively, it needs to look at the entire building cycle rather than isolated elements of the project, or isolated materials. The bottom line is emerging and it says that BIM will be the most effective way to reduce construction waste, by not creating or over-procuring the materials, equipment or labour in the first place.

Dajani adds; “Municipalities in different cities are starting to increase their use of BIM. It isn’t a software, it’s the process of how you do things. It isn’t just about making it pretty. If you are to really manage and reduce your operation cost, especially of a school or hospital or airport, you need to look beyond and into the lifecycle asset management.”