Behind the scenes: Akoya by Damac 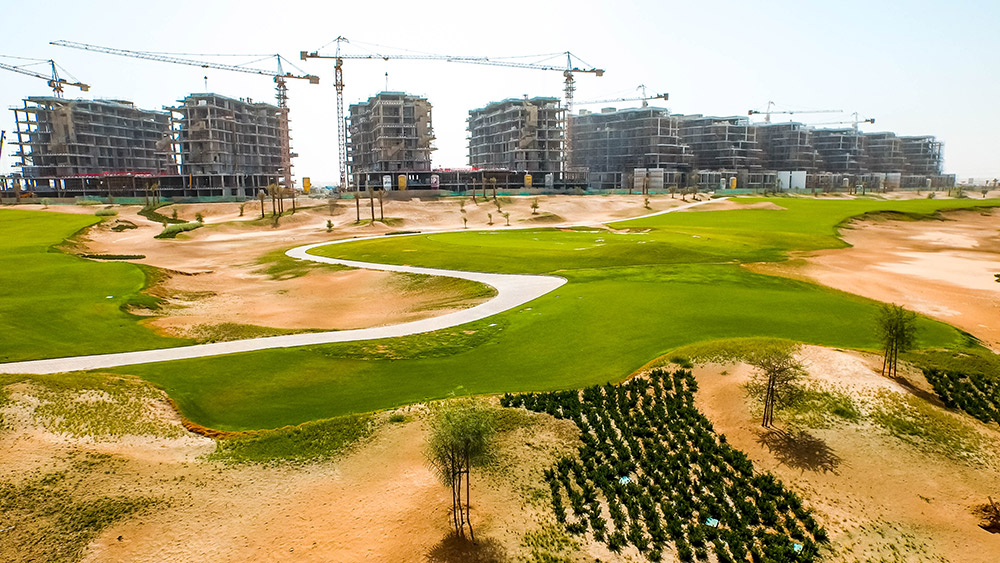 Construction Business News ME visits the site of Akoya by Damac and speaks with Niall McLoughlin, senior vice president of corporate communication and investor relations at Damac, about progress on Dubai’s first masterplanned development since 2008 and the first community to be built by a private company

Akoya by Damac, located off Umm Suqeim Road in Dubai, is about a 30-minute drive away from Downtown Dubai. This, according to senior vice president of corporate communications and investor relations at Damac Niall McLoughlin, is one of the key reasons the company sought out the location; to build a destination within itself. When we entered the development, through grand gates, branded with the project name it felt like a little town on its own. The site visit felt more like finding an oasis in the desert, rested in the middle of sand plains was this majestic community of 42 million sqft. The masterplan looked greener than expected, with golf course spanning across most of the area.

The golf community has made great progress since its high-profile launch two years ago, with the first residents set to make it their home later this year.

The $6bn community is said to be the most luxurious development in the region, with high-end branded real estate, luxury mansions and villas, serviced living concepts, the Trump International Golf Course, a 4.3 million sqft private park and entertainment-themed retail walks.

The community is said to be on schedule with many projects with the masterplan completing earlier than expected. Main contractors have reportedly made a notable progress on-site with more than 2,600 villas and 18 apartment buildings at various stages of construction and the first substation – which will provide 75% of power to the development will be completed and handed over by 2019.

The Trump International Golf Club on the other hand is 95% complete with the club house more than one fifth finished. The project has also already been named the ‘Best Golf Development in the World’ at the International Property Awards ceremony in London.

In the first year of development, the construction site was visited by iconic businessman and now presidential candidate Donald J. Trump, who believes that the project will be a “huge success”.

“Never before has there been such a varied mix of real estate, retail and lifestyle options all in one location,” added McLoughlin. “The community will have a modern feel and the villas will be constructed following contemporary architecture, and not very arabesque.”

The community will soon add international schools, mosques, clinics and spas along with the highly anticipated ‘Drive at AKOYA’ – a retail, dining and entertainment strip.

The Drive is similar in length to ‘The Walk’ at Jumeirah Beach Residences (JBR) and reflective of Rodeo Drive in Beverly Hills, The Croisette or Champs Elysees in Paris and will include high-end food and beverage, retail shopping and serene locations to meet friends. The shopping strip also includes four dedicated areas with entertainment for the whole family, including a golf putting green, an outdoor ice-skating rink, an interactive kids play area and a large outdoor cinema screen.

McLoughlin says: “The entire community, once completed, will have over 80,000 residences. Initially before the launching, we have questioned ourselves where will all these people living Akoya go for entertainment. The only closest prime centre was the Mall of the Emirates. So that’s why we tried to create a destination within Akoya, so that the people will not have to leave their community to be entertained.”

He adds: “We have thought so much about how we could make it a destination for tourists as well. We intend for Akoya to be a place for people to visit and not just live.”

Progress at the master development

“We are delighted with the progress made at Akoya by Damac and look forward to welcoming the first residents of this exciting project later this year,” says McLoughlin. “The master development has certainly been challenging in size, scale and speed of delivery, but we have been delighted with the speed and quality of progress to date.”

The Damac team talk about how even though the project spells luxury, the focus of this project has been the buyers. McLoughlin says that the idea to build an out of city masterplanned community was inspired by research proving buyer demand.

The research was conducted firsthand by Damac’s 600 salespeople who communicated customer feedback. “The needs of the market were then shaped into a product that is innovative, modern and market driven,” says McLoughlin. “Our team was able to lay all the groundwork rather quickly to launch in August 2013. Since then we have been successful not only on the construction side but also commercially.”

He says: “We have 2000 employees dedicated and working for Damac, out of which 450 are in our project delivery team. No other organisation in the market has that. We have such a strong in-house team.”

“Around 18 months ago this was just a blank canvas, we came in with these 450 people and were able to transform it into this.”

He says that the company initially went to the Dubai Government, and at the time were listed in London. “Our financials were out there and our balance sheet was very strong and our track record at that time had 12000 units delivered. We were a proven entity, we could deliver and we had proven that,” says McLoughlin. “We asked the government for a plot of land to become a master developer, they have never done that before. Previously only government entities have been permitted to build communities on this scale, but we are the first private company to become a master developer.”

Akoya by Damac has been the first major master development to be announced after Dubai’s economic recovery following the financial crash in 2008. The team at Damac believe that it is proof of a strong market and helps reinstate faith in the emirate’s resurgence.

McLoughlin says that currently the real estate market is very mature, with intelligent buyers. He explains that immediately after the recovery there was rapid expansion until 2014. However like any market, the rate of acceleration slows down eventually to a more steady growth. “We are now in a single digit growth, and customers see transactional values dropping and assume the market is fluctuating.”

With rent prices decreasing in parts of Dubai, McLoughlin says that this should not be confused with a weak market. He says that most projects launched in areas like Business Bay and Downtown Dubai have higher rate. He says: “The price of land down there is quite expensive, it is in the middle of the city.”

He says that with price per square foot reaching AED2,000 along with the limited amount of space available, Damac decided to look beyond the city.

He says: “There was no space for a masterplan of this scale in Business Bay, for example, so we bought land outside of Dubai, in the suburbs.”

Choosing this location has reduced the developer’s cost which helps in selling the same amount of land for less. McLoughlin says: “People wrongly assume this change in price signals a drop, when in actuality they are buying a different product as it is in a different location. If they were buying something like this in the main city it would be more expensive.”

He adds: “There is a demand in the market today that wasn’t there before, it is for value housing. What I mean by value housing isn’t specifically affordable housing cause that could be subjective.”

Damac’s decision to deliver value housing, he says, has been based on market response. “Yes, the transactional price has come down, that does not mean that the other product has fallen. That does however mean that there is a new pricing.”

He says: “We think the project really talks to those buyers looking to set up home in Dubai in a safe and peaceful environment while at the same time, being part of a high-end district.”

The first projects in Akoya by Damac will open later this year, with the full community open and operational in 2019.